You're being misled on running mate choice, Sonko tells Raila

Sonko said Kalonzo would on average bring into Azimio about 3.5 million voters.

• He said Kalonzo's votes combined with around 1.5 million of his own would bring to Azimio around 5 million votes.

• Sonko said Kalonzo has an added advantage as an experienced diplomat with a proven track record in peace mediation. 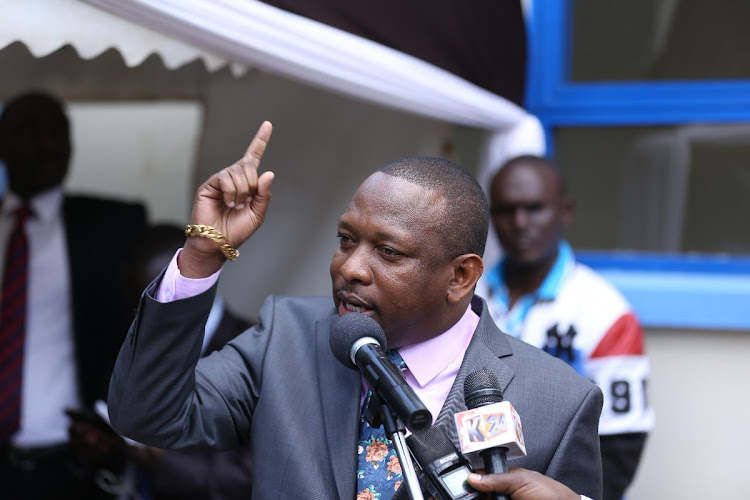 Sonko says Wiper Party leader Kalonzo Musyoka has sufficient political experience and considerable following and should be an automatic deputy to Raila.

"Kalonzo's votes are not just from Ukambani, Kalonzo is a national leader. His votes are over 3.5 million," Sonko said.

He claimed he commands around 1.5 million votes countrywide which when combined with Kalonzo's would earn Raila roughly 5 million votes.

"Raila Odinga, you are the next president, there is no doubt about it. We respect you but the only problem is your secretariat, those people around you," Sonko said.

"Hon Raila listen, these people in boardrooms are misleading you. Pick your deputy president and announce him today and let us sing Raila Tosha and you will become president and Kalonzo your deputy," he added.

Sonko's remarks were seemingly in reference to intentions to subject the former Vice President to an interview to determine his suitability to deputise Raila.

A seven-member panel has been mandated with executing the mandate.

The panel, however, made a big U-turn on May 4 and said it's not mandatory for its coalition bigwigs to physically appear for interviews to get the job.

In what appeared to be a response to pressure by the Wiper leader and his brigade, the panel said interviews would only be conducted for those wishing to give a presentation before the team.

On Friday, Sonko joined dissenting voices in Kalonzo’s camp in calling for the automatic selection of the Wiper leader as Raila’s running mate.

Sonko said Kalonzo has an added advantage as an experienced diplomat with a proven track record in peace mediation in South Sudan and the Kenyan cases at the ICC.

The former city governor who is now eyeing the Mombasa governor seat on a Wiper ticket cautioned the Azimio brigade against undermining Kalonzo.

While making reference to the 2007 disputed elections, Sonko said fate has often favoured Kalonzo in times of political turmoil and uncertainty.

"When Kalonzo defended his interests then, they called him watermelon. He left and joined Kibaki and he became Vice president," Sonko said.

"So this should be a warning, look at the dynamics of the country. Don't behave as if you know everything," Sonko added.

The choice of running mate can make or break a candidate’s chance to clinch the presidency.
Siasa
1 month ago

The selection panel will close the exercise on May 10.
News
2 months ago

I have no links with Ruto, says Kalonzo

Says he does not need UDA or anyone to lobby for him to be Raila's running mate.
News
1 month ago
WATCH: The latest videos from the Star
by EMMANUEL WANJALA Radio, Print & Digital Reporter
News
06 May 2022 - 15:15