I spent a night in Nyeri in honour of Kibaki - Raila

• Raila spoke when he joined other Christians for Sunday prayers at St. Peter's ACK Church in Nyeri town.

• Nyeri Senator Ephraim Maina who accompanied Raila told locals not to gamble when electing leaders in 2022 but elect leaders with integrity who will deliver services. 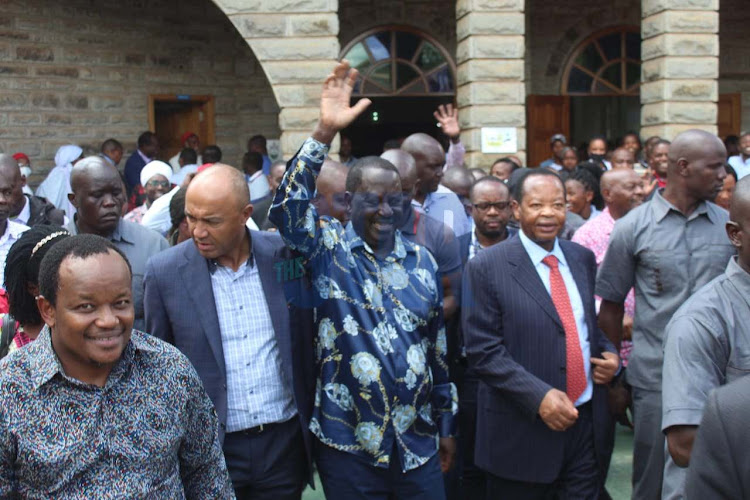 ODM leader Raila Odinga on Sunday said that he decided to spend the night in Nyeri in respect for the late President Mwai Kibaki whom he worked with as Prime Minister for five years.

This was after attending the burial of the third president in Othaya, Nyeri County on Saturday.

Raila spoke when he joined other Christians for Sunday prayers at St. Peter's ACK Church in Nyeri town.

He said he will also attend a golf tournament organized in honour of Kibaki, who was an ardent player of golf.

Odinga highlighted his vision for the country and said he was ready to take over from where president Uhuru Kenyatta left including continuing with the construction of the Kenol- Marua dual carriageway.

"We want to implement the dreams of our forefathers of fighting ignorance, diseases and poverty, our three main enemies," he said.

Nyeri Senator Ephraim Maina who accompanied Raila told locals not to gamble when electing leaders in 2022 but elect leaders with integrity who will deliver services.

Maina said the corrupt has no business living as they participate in looting leading to deaths of many people due to lack of drugs and food.

He called on voters to elect people of Kibaki's caliber in August.

Maina hailed Raila for participating in second liberation and supporting Kibaki in 2002 and told local people to reciprocate by voting for him. 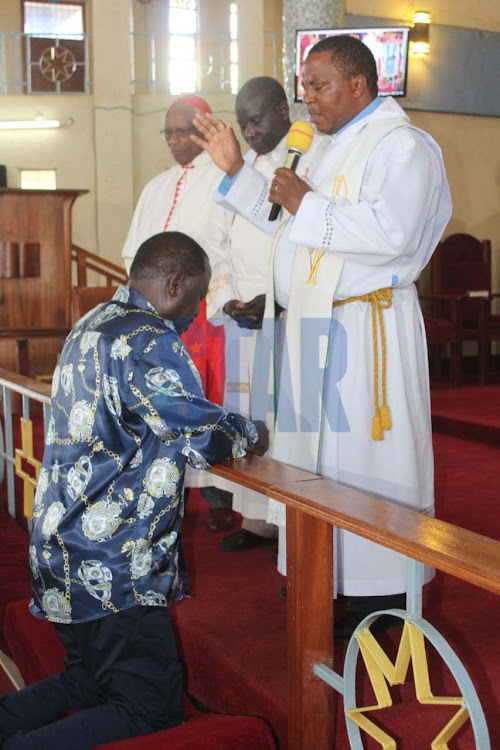 Murang'a women representative Sabina Chege called on the church to support Odinga saying he is one of them as he is an ACK worshipper.

"We hope something new will happen in 9 August and that he will be elected president," he said.

CS Raphael Tuju called on leaders to emulate Kibaki and Uhuru who have been sponsoring needy children all over the country but do not go talking about it.

"You will know them by their track record. Whether they have engaged in graft in the past. Do not give hyenas a job to take care of your goats," she said.

She said she was supporting Odinga because he is a selfless leader.

Former Gatanga MP Peter Kenneth said Odinga unlike others is visionary and will unite the country and spur development.

He called on the Mt. Kenya locals to be very keen when electing leaders in August.

"If you are looking for another Kibaki that will cater for your interest, then he is here (Raila)," he said adding that like Kibaki he does not keep grudges.

He said the community risks being left in the opposition after 2022 as other areas in the country are supporting Odinga.

Nyeri senate aspirant Priscilla Nyokabi said that Raila delivered Kibaki's destiny, he is father of devolution and that Nyeri wants resources increased in county and so should supported Odinga for the sake of the future of devolution.

"In my view, Kibaki had the knowledge and experience that were needed for the revolution of the country,"
News
4 months ago

Ruto spoke during the burial service of Late President Mwai Kibaki in Othaya.
News
4 months ago
Post a comment
WATCH: The latest videos from the Star
by EUTYCAS MUCHIRI Correspondent, Nyeri
News
01 May 2022 - 16:14
Read The E-Paper