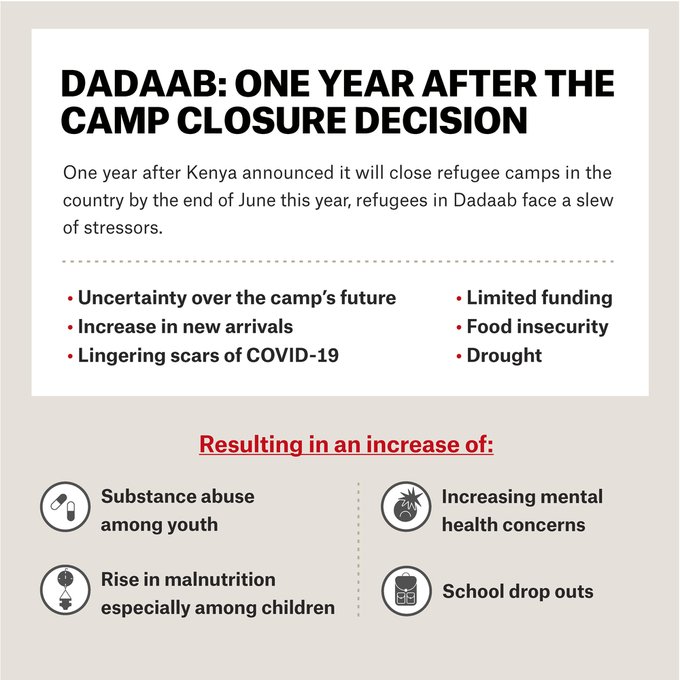 One year after Kenya announced it will close refugee camps in the country by July this year, refugees in Dadaab are staring at a storm.

Médecins Sans Frontières-Doctors Without Borders project coordinator in Dadaab says lack of clarity over the future of the camps has affected humanitarian agencies.

They say it has also negatively impacted their ability to scale up assistance for refugees and host communities since many are struggling to secure funding and plan future activities.

Philippe Mathys, the public engagement and acquisition coordinator said durable solutions are still not within reach for the over 200,000 refugees in Dadaab.

"Humanitarian assistance remains way below what is needed, the reverberating economic impact of the Covid-19 pandemic along soaring prices of essential commodities have nibbledcoping capacities,” Mathys said.

It comes at a time when refugees say they are having to share meagre resources with rising numbers of new arrivals in the camps.

Many have been forced to move in search of food and water as withering drought sweeps east Africa.

This year, MSF's outreach teams have reported some 105 new arrivals, mostly from Somali.

“All progress being made towards integrating refugees in Kenya are outpaced by new humanitarian needs on the ground as refugees have depleted the few options they had," Mathys said.

Food rations have remained inadequate as a result of constant funding cuts.

Informal jobs in the camps are few as economic activity is weak and humanitarian operations paralysed.

According to MSF, malnutrition admissions in their health centre in Dagahaley camp is on the rise, more than doubling in February compared to last year.

According to MSF, substance abuse among the youth in the camps has risen and cases of attempted suicide among refugees have increased.

The new Refugee Act brought in by Kenya this year has shifted the focus from closing the camps to easing refugees’ integration in the country.

It has revived previously stalled efforts to work towards providing work opportunities and access to public services for refugees.

“Kenya should immediately announce that camps will not close and release a roadmap for integration to put an end to uncertainty among refugees.

"Donors must swiftly step-up support so they can scale up assistance and protection for refugees including new arrivals before the humanitarian situation deteriorates further.”

Krause said the international community, have a responsibility to push for integration for refugee communities to be self dependant.

“Kenya and donor countries must double down on efforts to provide durable solutions for refugees," she said.

"They must ensure the availability of predictable and timely humanitarian assistance to address critical needs and support refugees’ transition towards a dignified life."

The complex situation has left the government torn between its domestic interests and international obligations, some of which are binding and can attract consequences if violated.

Last year, the government announced it will close the complex over insecurity issues.

A similar attempt was made in 2019 following the DusitD2 complex terror attack in Nairobi, where 21 people were killed.

This is after it emerged one of the five men in the attack came to Kenya through Dagahaley refugee camp in the larger Dadaab complex.

Police investigations showed the unidentified suspect posed as a refugee before he was facilitated and brought to Nairobi to execute the attack.

In 2016, government ordered the closure of Dadaab refugee camp.

The then Interior Cabinet Secretary Joseph Nkaissery cited security, environmental degradation and economic concerns as the key factors that had informed government's decision to close the camp.

The court also declared the repatriation of refugees unconstitutional, describing it discriminative.

The judge directed government to adopt mechanisms that would ensure the department dealing with refugee affairs is functioning properly.

Last year, Interior CS Fred Matiang'i and his team delivered their message on closing the camps, citing insecurity and attacks linked to accomplices of al Shabaab.

UNHCR urged Kenya to ensure any decisions on closure allows for suitable and sustainable solutions.

Kenya to close Kakuma, Dadaab camps by the end of June 2022

Repatriation of refugees to countries of origin is part of the plans that Kenya has set.
News
1 year ago

Why refugee repatriation is untimely

Public health crisis occasioned by the pandemic would make the process difficult and costly.
Siasa
1 year ago