50 religious leaders from other faiths and denominations are expected to arrive.

•50 religious leaders from other faiths and denominations are expected to arrive.

•Former President Mwai Kibaki was a Catholic faithful. He attended his masses at the Consolata Shrine in Westlands. 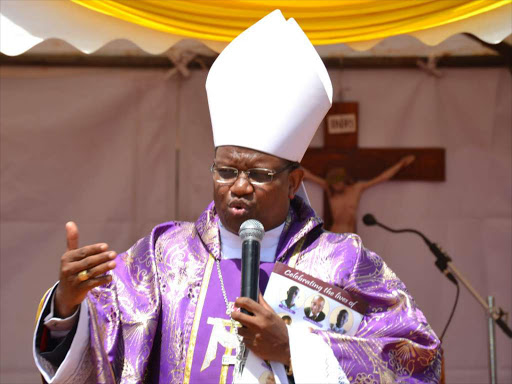 Catholic Archbishop of the Archdiocese of Nyeri Anthony Muheria will on Saturday lead the burial service of late former President Mwai Kibaki in Othaya, Nyeri county.

Three catholic bishops will preside over Kibaki's final holy mass and they will be led by Archbishop Muheria.

Former President Mwai Kibaki was a Catholic faithful. He attended his masses at the Consolata Shrine in Westlands.

50 religious leaders from other faiths and denominations are expected to be present.

The Catholic bishops and priests will wear black and purple regalia. The Catholic church recommends purple for funerals.

The clergy will also be draped in purple.

The military will proceed and ensure the security of the area.

“I will remember him for his Statesmanship patience. He was a listener, gifted and an intellectual man. I was the age of his son, and yet when we sat on the few occasions we had, he listened keenly and gave me tremendous respect that I was surprised. Not just the respect of my office, but the respect of what I was saying,” Muheria said.

“I pray that leaders emulate his kind of statesmanship.”

On Friday, Muheria caught the attention of Kenyans after containing a man who had unlimitedly sought an audience during Kibaki's State funeral service at Nyayo Stadium immediately after President Uhuru Kenyatta's speech.

He de-escalated the situation by calmly moving the man away from the microphone as security agents showed up to contain the situation.

“Everyone should, try and show a state of mercy when called upon,” Muheria told a local TV station

Kibaki final journey: Body on the way to Othaya by road