Aukot had asked the court to bar Raila from being on the ballot.

•Aukot had asked the court to bar Raila from being on the ballot on grounds that he is still a public servant.

•Raila in his response said that IEBC has not cleared any candidate to vie for any specific position. 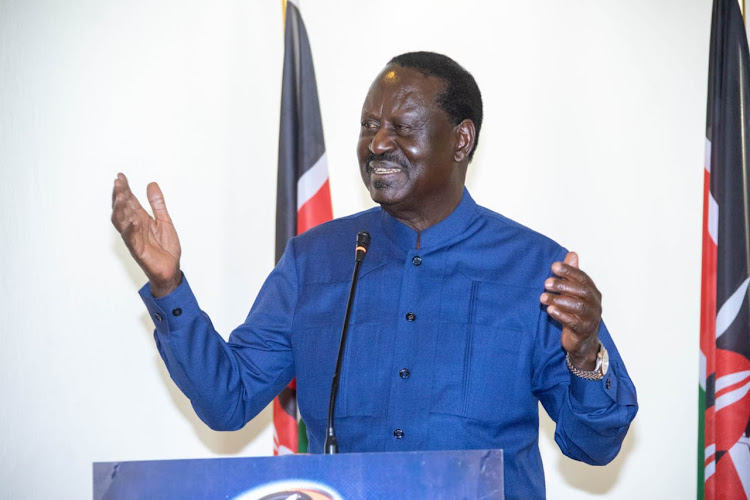 ODM leader Raila Odinga has filed a response to the petition by Thirdway Alliance Party leader Ekuru Aukot who wants the court to bar him from contesting for the presidency in the August 9, elections.

Aukotasked the court to block Raila from being on the ballot on grounds that he is still a public servant.

In his response through Paul Mwangi and Company Advocates, Raila argued that the petition is defective both in form and in substance, therefore, unmerited and brought in bad faith.

“As per Article 260 of the Constitution of Kenya, 2010, the 2nd Respondent (Raila) holds no office in the National government, County government, or in the public service. There is no remuneration for the entitled persons at all. They receive an allowance and only when they take up specific official functions which they have the right to reject. Whether or not they reject the official functions for life, they still remain entitled persons.”

Raila added that the court should allow him to vie for the presidency as per Section 4(2) and 8 of the Acts as read with Articles 137(1) (b) of the Constitution of Kenya, and dismiss the petition.

According to Raila, the petitioners have not demonstrated any prejudice in their petition.

At the same time, Raila said that IEBC has not cleared any candidate to vie for any specific position, hence, there are relevant constitutional bodies with the mandate and procedure to clear candidates to contest in a general election.

In a separate response,  the office of the Attorney General, who was mentioned as the 1st Respondent in the case, said that the petition fails the test of justifiability and ripeness.

“The court is being invited to embark on an academic exercise which is a waste of precious and scarce judicial time,” AG’s office said through his litigation counsel Jackline Kiramana.

“That contrary to the position taken by the Petitioners, the Act does contemplate and provide for the entitled persons under the Act to participate in political activities…the present dispute relates to nomination of candidates, whose jurisdiction lies with the IEBC in the first instance as set out in Article 88(4)(e) of the Constitution as read with section 74 of the Elections Act.”

The Attorney General added that the petition is defective both in form and in substance and is therefore unmerited and brought in bad faith.

In his petition, Aukot also wants the court to bar IEBC from clearing Wiper leader Kalonzo Musyoka and ANC leader Musalia Mudavadi from being given nods as running mates in the upcoming August polls.

Aukot alongside his chair Miruru Waweru argues that the three are lifetime public servants and cannot resign to run for elective posts as other public officers.

Aukot in court to block Raila from vying in August polls

He argues that the party leader alongside Kalonzo and `Mudavadi are still public servants.
News
5 months ago

Ruto, Raila in trouble as IEBC asks Haji to probe them over elections law