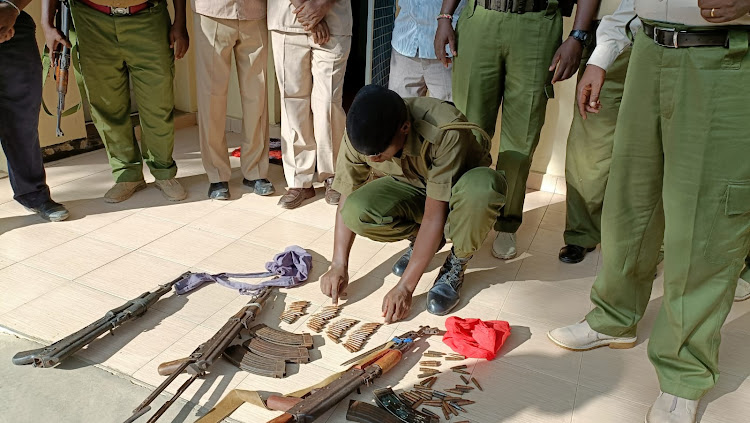 ILLEGAL WEAPONS: A Police officer displays some of the guns and ammunitions recovered in the outskirts of Garissa town on March 2, 2022.
Image: STEPHEN ASTARIKO

The proliferation and trafficking of Small Arms and Lights Weapons (SALW) continues to threaten efforts to meet the Sustainable Development Goals (SDGs).

Regional Centre on Small Arms and Light Weapons in the Great Lakes Region, the Horn of Africa and Bordering States (RECSA) revealed that gun crimes have huge impact on the society, which is struggling to meet the goals.

Speaking during a media workshop in Machakos on Saturday, Recsa’s Julius Birungi said it is difficult for member states to meet the goals by 2030 as earmarked, if the trend is not stopped.

“We continue to witness devastating trends where illegal guns are used to disrupt lives at various levels. This has a huge impact in efforts to meet the SDGs,” he said.

Birungi said member states should meet their obligations in addressing the proliferation of the weapons responsible for the crimes.

“These weapons have had devastating consequences that have led to armed conflict, crime, environmental degradation, fuelling the illegal exploitation of natural resources, poaching and abetting terrorism and other trans-national organised crimes in the region.”

This has disrupted life there by displacing many and leading to catastrophic cycle of attacks.

Schools have been closed in some of these places out of fears of more attacks.

SDGs or Global Goals are a collection of 17 interlinked global goals designed to be a "blueprint to achieve a better and more sustainable future for all".

The SDGs were set up in 2015 by the United Nations General Assembly and are intended to be achieved by 2030.

Others are industry, innovation and infrastructure, sustainable cities and communities, responsible consumption and production, climate action, life below water, life on land, peace, justice and strong institutions and partnerships for the goals.

Speakers at the event called on member states to lift up their efforts to address the menace.

“If there is an issue of a gap of insecurity in the regions which is forcing the locals to arm themselves, it is upon the governments to address it.”

The Nairobi Declaration was in 2000 made and paved way for the signing of the legally binding instrument- Nairobi Protocol for the Prevention, Control and Reduction of Small Arms and Light Weapons in the Great Lakes Region and the Horn of Africa in 2004.

Subsequently a regional intergovernmental institution- Recsa -was established in 2005 as a mechanism to coordinate the implementation of Nairobi Declaration and Nairobi Protocol.