HIV infections among gays are from Coast — scientists

•These three regions have the highest infections among Men who have Sex with Men (MSM).

•In Kenya, while the national HIV prevalence is 4.9 per cent among adults, it is three times higher in MSM than in heterosexual men. 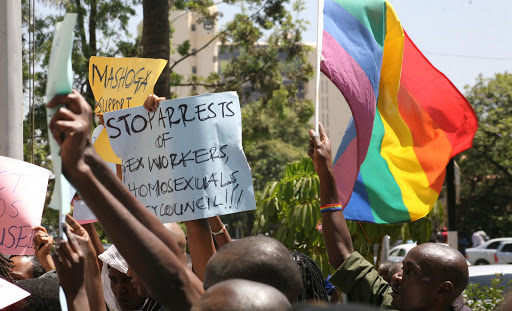 Activists wave the gay pride flag in a past protest in Nairobi
Image: FILE

Most HIV infections among gay people in Kenya originate from the Coast, scientists have said.

The majority of the HIV subtypes currently spreading moved from Coast to Nairobi then to Nyanza.

These three regions have the highest infections among Men who have Sex with Men (MSM).

The trend was identified by scientists at the Kemri-Wellcome Trust in Kilifi, the University of Nairobi, Nyanza Reproductive Health Society, and their partners in South Africa, Sweden, Canada and the United States.

In Kenya, while the national HIV prevalence is 4.9 per cent among adults, it is three times higher in MSM than in heterosexual men.

“Strengthening HIV-1 prevention programmes to MSM in geographic locations with higher HIV-1 prevalence among MSM (such as Coast and Nairobi) may reduce HIV-1 incidence among MSM,” authors said in the study published in Frontiers in Microbiology journal.

HIV prevalence among MSM in Kenya ranges from 17.8 per cent in Kisumu to 24.5 per cent in Coast and from 25 to 26.4 per cent in Nairobi, the authors said.

They traced the origin of infections by sequencing blood plasma obtained from MSM living with HIV at the Coast, Nairobi and Nyanza.

The researchers compared those samples to build a family tree (or phylogenetic analysis) that reveals both the virus evolution and the patterns of transmission.

“Phylogeographic inference showed significant HIV-1 dissemination from Coast to Nairobi and Nyanza and from Nairobi to Nyanza,” they said.

Reverse transmissions were rare and occurred only from Nyanza to Nairobi.

A few presumptions were made about why the Coast is an important source of infections among MSM.

One explanation is that MSM from Nairobi visit the Coast for domestic and sex tourism, pick the virus and spread it upon return.

Another reason could be mobile MSM sex workers who get infected at the Coast and then export to other regions.

The study appears to absolve foreign tourists of any major role in spreading HIV in Kenya.

“HIV-1 sequences in this study were not closely related to reference sequences from the global epidemic, implying that the HIV-1 epidemic among MSM is sustained locally,” the authors said.

The study suggests there is an infrequent spread of HIV between MSM and presumed heterosexuals in the general population.

“MSM in Kenya have a high burden of HIV risk—to reduce overall HIV-1 incidence in Kenya, there is a need to implement directed HIV-1 prevention and treatment to MSM in Kenya.”

HIV infection among gays rises as many fear testing

OYARE: Address needs of people living with HIV and AIDs