The nominations were last week canceled after chaos and disruptions

• Mwaura, however, clarified that nominations for Member of the National Assembly in Roysambu constituency and all Wards in Nairobi will proceed as scheduled on Wednesday, April 20. 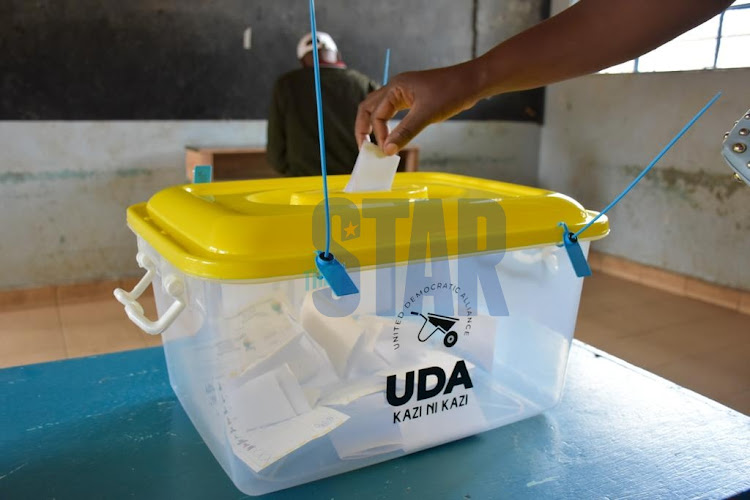 A UDA party member cast her vote at a UDA branded ballot box during the nomination process on April 14 2022.
Image: MERCY MUMO

In a statement dated April 18, UDA National Election Board chairman Anthony Mwaura said the primaries in Dagoreti North and Mathare constituencies scheduled for April 20 had settled on concesus.

Instead, he said, alternative methods will be used to identify nominees.

"This, therefore, means there will be no universal suffrage nominations between the coalition partners as earlier communicated on April 17, 2022," Mwaura said.

He further revealed that UDA will also not conduct party primaries in Embakasi East and Kamukunji constituencies.

"Instead, alternative methods as provided by the party constitution will be applied," he said.

The nominations in Kamukunji were to take place in Airbase, California, Eastleigh North, Eastleigh South and Pumwani wards.

Mwaura, however, clarified that nominations for Member of Parliament in Roysambu constituency and all Wards in Nairobi will proceed on Wednesday, April 20.

Nominations in all those areas were postponed on April 14 following logistical hitches, disruptions and chaos.

Nominations in Starehe and Kamukunji failed to take place after the exercise was marred by violence.

Primaries for the MCA positions will take place in Landi Mawe, Nairobi Central, Ngara, Pangani and  Ziwani within Starehe sub-county.

Kangemi ward in Westlands and Mowlem in Embakasi West will also conduct repeat nominations on Wednesday.

The UDA party will hold nominations in various parts of Nakuru County tomorrow, some of which will be repeat nominations.

The primaries were called off on April 14 in what the party said was due to 'unforeseen circumstances'.

The primaries are being held alongside those of Nandi Hills constituency.

Some of the areas include Embakasi East, Mathare and Dagoretti North for MP aspirants.
Counties
2 months ago
WATCH: The latest videos from the Star
by EMMANUEL WANJALA Radio, Print & Digital Reporter
News
19 April 2022 - 12:11