• Kikuyu MP Kimani Ichungwa claimed that a huge sum of money had been withdrawn from a government account to buy off politicians.

• Tharaka Nithi senator Kindiki Kithure claimed the funds have been diverted to the Jubilee Party. 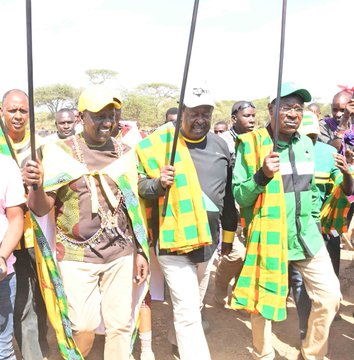 They said it was irresponsible for the government to divert funds meant to fund development projects to facilitate political campaigns.

Kikuyu MP Kimani Ichungwa claimed that a huge sum of money had been withdrawn from a government account to buy off politicians.

He warned public servants responsible that they would be held accountable for misappropriation of public resources.

“Those in government should know that they will be held accountable individually for the embezzlement of public funds diverted to political campaigns.”

Ichungwa spoke at Longonot and Mai Mahiu in Naivasha in the company of Deputy President William Ruto.

He said parliament allocated Sh5.7 billion shillings to subsidize fertilizer prices from Sh6,000 to Sh2,5000 but the funds were diverted to the security docket where they will likely be misappropriated.

“The Sh5.7 billion has not gone to security, it has been diverted to fund Azimio la Umoja campaigns,” he said.

Kindiki claimed the funds have been diverted to the Jubilee Party.

“They are now using these funds to buy MPs to join Jubilee Party.”

The Tharaka Nithi senator said Kenya Kwanza leaders will not give in to threats, blackmail and bribery to betray Kenyans.

“When we take over on 10th of August this year, we will audit government expenditure because these are not personal funds, they are public funds.”

Kabogo said he will not fall for bribes being offered by government to join Azimio la Umoja.

Gachagua said the people of Mt Kenya have rejected the Azimio la Umoja flag bearer, Raila Odinga, saying Ruto has a better plan for the region.

On his part, the DP said the destiny of the country will not be decided by a few individuals guarding their self interests.

The Deputy President said the Kenya Kwanza Alliance will put in place a government that will focus on addressing the needs of ordinary citizens.

Asks residents should reject Azimio leaders when they come to seek support.
News
8 months ago