In February, a new report warned that wildfires are set to become more intense and frequent.

•Fire has been reported in Mount Kenya and Aberdares.

•KFS said fighting off the fire is an expensive affair. 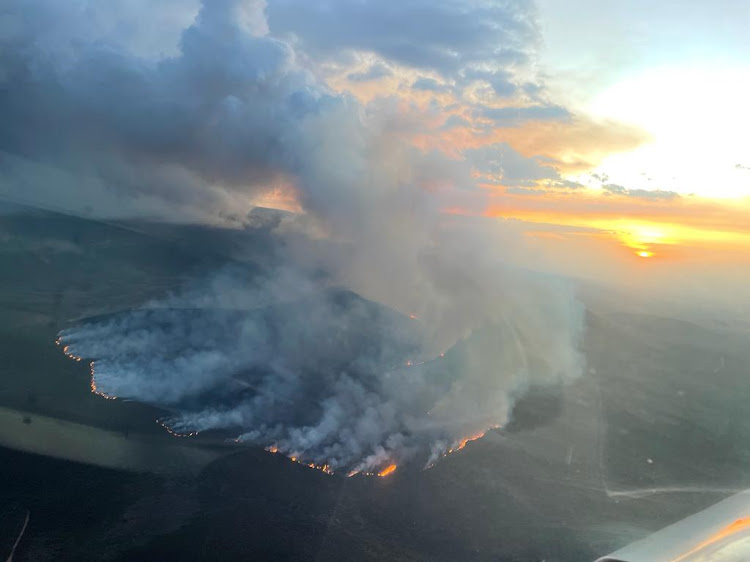 The Kenya Forest Service has appealed for support to contain wildfires ravaging the protected forests.

KFS board chairman Peter Kinyua on Wednesday raised his concerns over the wildfires, saying they need support.

"Our biggest challenge is the fire that we have today in Mount Kenya, Aberdares and Kirisia," he said.

The chair spoke at KFS headquarters, Karura, when he unveiled 45 motorcycles that will help to bolster forest conservation.

The motorcycles were bought through the support of the Green Zones Development Support Project funded by the African Development Bank and the government.

"These fire breaks existed many many years ago," he said

He added that tractors will play a key role.

Kinyua said one of the things  they will have to embark on is to get equipment and participate in fire fighting.

He said fires do not come into the forests but communities residing near the forest are the ones behind it.

"Communities are the ones who light fires as they are getting ready for planting season or those harvesting,"he said.

"The biggest problem we have is the moorland. Fires always start in the moorland, not in the KFS area and then they come down depending on the wind."

The board chairperson challenged government institutions like Kenya Wildlife Service to start creating fire breaks in their areas.

He warned that failure to have them will see millions of shillings spent planting and arresting fires.

He said hundreds of acres have since been ravaged by fires adding that they were not out of control.

Kinyua said huge fires have engulfed Mount Kenya but the one in Aberdares had been suppressed by Tuesday.

"We have a big fire in Mount Kenya that is moving dependent on the wind," he said.

"The communities are working closely with us. We have some NGOs giving us some support spending a lot of money."

He said KFS has also put a lot of resources into putting off the fire and once it rains, a lot of forests will rejuvenate.

The chairperson said KFS has trained a team in partnership with NGOs as well as the communities to help in the firefighting mission.

He said the terrain is quite difficult adding that the fire line as per yesterday was at about four kilometres.

In February, a new report warned that wildfires are set to become more intense and frequent, ravaging communities and ecosystems in their path.

The report by the Unep and GRID-Arendal said climate change and land-use change could lead to a sharp rise of fires by up to 50 per cent by the next century.

The Unep report, 'Spreading like Wildfire: The Rising Threat of Extraordinary Landscape Fires' said regions previously unaffected by wildfires will be the worst hit.

It was released before the fifth session of the UN Environment Assembly in Nairobi, between Monday and Wednesday.

In 2020, wildfires consumed large chunks of the Tsavo conservation area and destroyed more than 800 square kilometres.

Tsavo was in the headlines in 2020 following fire outbreaks that destroyed more than 800 square kilometres.
News
5 months ago

Fire at Aberdares might be contained by midday-Rhino Ark

• The fire incident started on Saturday night and is affecting Northen part in Eburru area • Rhino Ark estimates that 1,359.0775 acres have been ...
News
6 months ago
“WATCH: The latest videos from the Star”
by GILBERT KOECH News Reporter
News
23 March 2022 - 22:00
Read The E-Paper