Uhuru said he is determined to leave the country in 'safe hands'.

• The president emphasized that he will continue focusing on national unity and peace as the most important ingredients for the country’s progress.

• At the same time, the president urged the youth including “boda boda” riders to be wary of politicians out to misuse them for cheap political mileage. 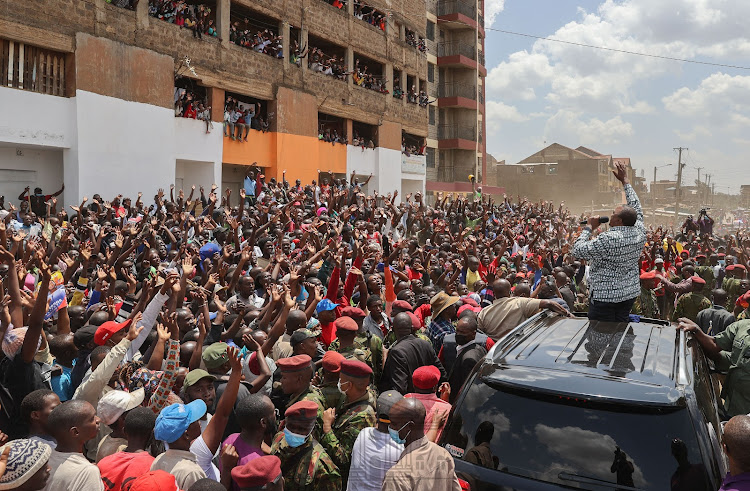 President Uhuru Kenyatta has fired back at his deputy William Ruto over recent attacks he directed at him saying he won't be cowed in his pursuit to unite the country.

The President while addressing citizens after opening the Mama Margaret Kenyatta Children Hospital in Nairobi County’s Korogocho informal settlement on Friday said he is focused on his mission to leave the country in safe hands.

Uhuru emphasized that he will continue focusing on national unity and peace as the most important ingredients for the country’s progress.

“I will continue to stand firm in my resolution that national unity is the most important thing for the country’s development and progress. I believe that justice will prevail not threats and insults,” Uhuru said.

His remarks come as a response to the Kenya Kwanza Alliance of DP William Ruto who have been blaming the president for betrayal and choosing to work with the OD leader Raila Odinga who they said has never voted for him.

Uhuru cited the newly opened hospital as an example of the developments that can be achieved if all leaders worked together for the country’s common good.

“If all of us, as leaders, join hands and concentrate on working together, we will succeed in transforming the lives of Kenyans. A good example is this hospital project that had stalled for close to 30 years but we managed to finish it when the national and county governments together with other leaders joined hands to ensure its completion,” Uhuru said.

The construction of the four-storey 350-bed hospital that is set to decongest Kenyatta National Referral Hospital, as well as another level 4 hospital in the city-county, was completed by the Nairobi Metropolitan Services (NMS).

Among the services that will be offered by the new facility include out-patient, in-patient, maternity, diagnostics, special clinics, intensive care unit services, dialysis, mortuary, accident, and emergency services.

The hospital is one of the 24 health facilities which President Kenyatta directed NMS Director-General Lt. Gen. Mohamed Badi to build in Nairobi.

He also pointed out that since the work on the 24 health facilities started, 18 of them have been completed and have served more than 4 million residents of informal settlements in Nairobi County.

“This shows that the efforts we have put in improving public hospitals are bearing fruits,” President Kenyatta said.

At the same time, the president urged the youth including “boda boda” riders to be wary of politicians out to misuse them for cheap political mileage.

The president assured “boda boda” riders and other small traders that the Government has no intention of frustrating them as purported by some politicians but instead it is working to improve their welfare.

“I will organize to meet you soon so that together we can work on how to improve the sector and ensure you reap maximum benefits from your sweat,” the President assured boda boda riders.

Health CS Mutahi Kagwe said the opening of the hospital is a culmination of the President’s directive to take quality health services closer to citizens through the Universal Health Coverage.

Other speakers at the event that were also attended by local leaders from the area included Lt. Gen. Badi and Nairobi Governor Anne Kananu.

Lt. Gen. Badi thanked President Kenyatta for his support, saying it has ensured NMS implements several projects that have benefitted wananchi, especially in the informal settlements.

The elders accused Ruto of abusing President Uhuru and his family.
Elections 2022
2 months ago

Five leaders are eyeing the Kiambu Governor seat in the Kenya Kwanza Alliance.
News
2 months ago
WATCH: The latest news from around the World
by KEVIN CHERUIYOT Online Journalist
News
18 March 2022 - 17:02