The diseases are a highly contagious and devastating, with significant impacts on livelihoods particularly those of small holders.

• The initiative for the 2022-26 period seeks to eliminate livestock diseases in Africa, which have already hurt the livelihoods of millions of livestock farmers 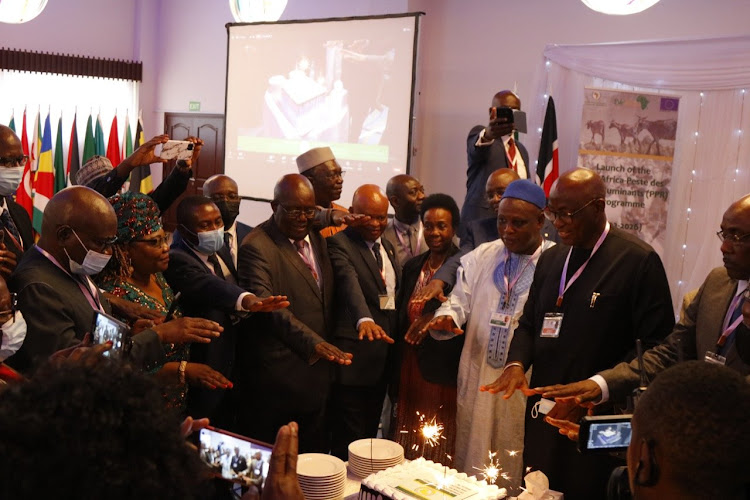 The launch of Pan African programme for the control and eradication of pest diseases in Nairobi on Thursday, March 17, 2022
Image: LUCY WANJIKU

The AU InterAfrican Bureau for Animal Resources on Thursday launched a Pan African programme for the control and eradication of pest diseases.

The initiative for the 2022-26 period seeks to eliminate livestock diseases in Africa, which have already hurt the livelihoods of millions of livestock farmers and led to food insecurity

AU-IBAR acting director Nick Nwankpa said the launch marked a milestone for renewed efforts towards enhanced resource mobilisation for the control and eradication of the diseases by the global target of 2030.

"This disease [Peste des petits ruminants] has rapidly spread to the rest of Africa and continues to cause devastation of sheep and goats. It’s control and eradication require a phased, risk-based approach with well-coordinated and harmonized activities across all regions,’’  Nwankpa said.

According to AU-IBAR, out of the population of 821.3 million people in sub-Saharan Africa, an estimated 63 per cent live in rural areas and derive their livelihoods and household food security from livestock, mostly small ruminants and poultry.

These populations mainly drawn from the Arid and semi-arid lands face challenges of extreme poverty, high gender inequality, vulnerability to drought and the impacts of climate change and poor resilience to drought and other crises.

Nwankpa said the diseases are a highly contagious and devastating, with significant impacts on livelihoods particularly those of small holders.

The AU-IBAR further urged partners to focus attention on the impediment to the implementation of the global, continental, regional and nation PPR programmes.

The overall objective of the plan is to contribute to food security, poverty alleviation and resilience of livestock-dependent communities in Africa and the economic growth of the affected countries hence.

It is projected that the global human population will increase to 9.6 billion in 2050 and that 50 per cent of this increase will in Africa, further increasing the demand for food, including animal products, with limited supplies. .

The continental bureau for Animal Resources also commemorated the 70th anniversary since its formation on Friday.

Equipping farmers to boost their yield

No rains, no losses for Kwale farmers with crop insurance

Started in 1976 by the Italians, it has been serving about 5000 people
Counties
10 months ago
WATCH: The latest news from across Africa
Post a comment
WATCH: The latest videos from the Star
News
18 March 2022 - 21:00
Read The E-Paper