Kalonzo, Gideon meet Jimmy Kibaki for partnership ahead of polls

On Wednesday, Gideon hinted at joining the Azimio team

• Gideon said OKA is still reaching out to like-minded people who are willing to join them.

• On Wednesday, Gideon hinted at joining the Azimio team. 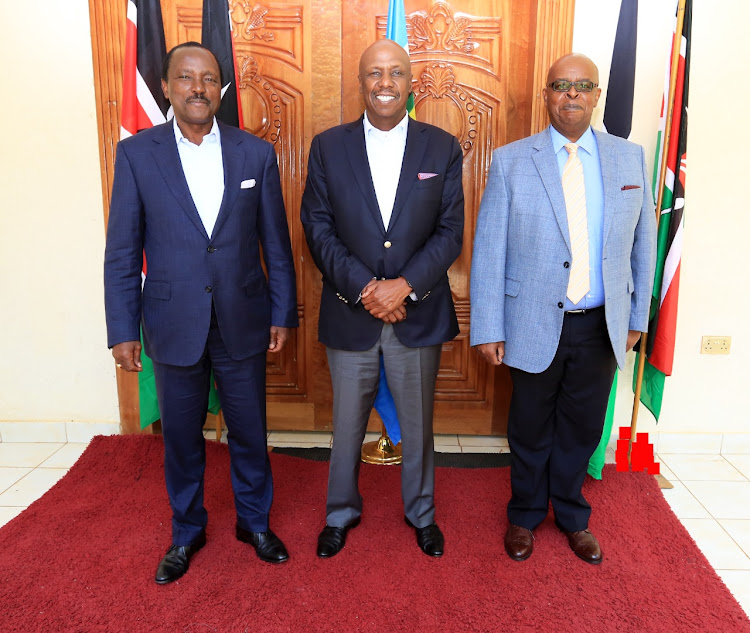 Wiper leader Kalonzo Musyok and his KANU counterpart Gideon Moi on Thursday met with Jimmy Kibaki for deliberations on the possibility of working together under the One Kenya Alliance.

Following Thursday's meeting, Gideon said the alliance is still reaching out to like-minded people who are willing to join them ahead of the August 9, general elections.

“We continue to reach out to like-minded leaders of different political formations to strengthen OKA,” Gideon tweeted.

The meeting came in the wake of reports of OKA being weakened following the alleged exit of Narc Kenya leader Martha Karua from the alliance.

Karua is, however, yet to announce whether she is willing to join the Azimio team in the event OKA seals a deal with the outfit.

The move by OKA to open talks with Azimio La Umoja in a bid to establish a working-together formula has caused jitters among some parties who are yet to fully make  up their mind to join Azimio.

On Wednesday, Gideon hinted at joining the Azimio team after he attended a joint rally with Raila where he appeared to suggest they will work together ahead of the August 9, polls.

However, it is not clear if his views reflect position of entire Kibaki family.
News
3 months ago

The Kanu chairman said the party is firmly in OKA.
News
2 months ago
WATCH: The latest videos from the Star
by KEVIN CHERUIYOT Online Journalist
News
10 March 2022 - 18:23