Crisis ahead as medics in Nairobi threaten to down tools

•The leaders claims that despite the notice, the Nairobi Metropolitan Services has failed to reach out and for an amicable solution

Health Services in Nairobi are likely to be disrupted beginning Tuesday should healthcare workers make real their threats to down their tools. 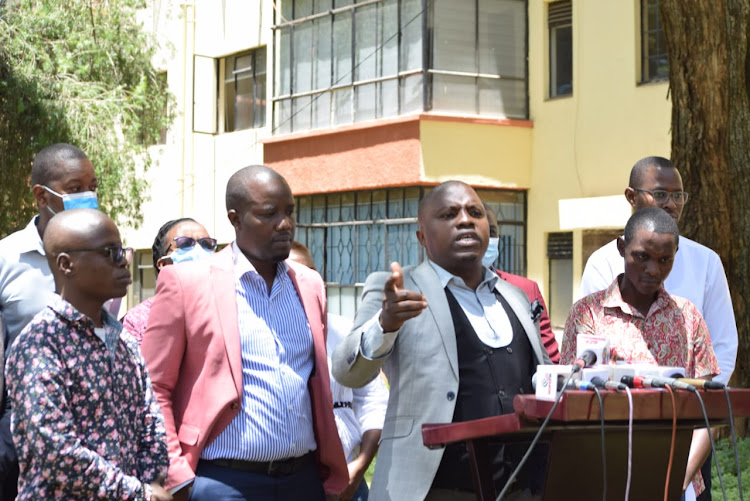 Health services in Nairobi are likely to be disrupted starting Tuesday should health workers make good their threat to down their tools.

This is after the 14-day strike notice issued by the unions on February 15 expired on Monday.

The leaders say despite the notice, the Nairobi Metropolitan Services has failed to reach out and offer an amicable solution.

The unions have accused NMS of failing to promote their members to their rightful job groups, with some having served in the same group for close to 10 years.

The also lamented that members on probation and contractual terms are yet to be confirmed as permanent and pensionable.

“We cannot continue suffering at the expense of cat and mouse games. We have no problem with construction of hospitals," Kenya Health Professionals Society Secretary general Brown Ashira said.

"[But] you can’t built hospitals and fail to motivate an employee who is working there.”

However, employees who were not seconded to NMS and those seconded are yet to benefit.

“While we could wish to ensure uninterrupted service delivery to the people, we have been taken for granted for too long,” Onchari said.

“We have given NMS ample time to settle our grievances. which ranged from promotions, re-designations, confirmations, stagnations, delayed payment of salaries and the issues of secondment," he said.

"We have tried to engage in good faith but NMS have shown us that our issues matter less."

The NMS director for Health could not be reached for comment on the matter.

However, the unions say despite their outcry to have their issues addressed, in the last financial year, NMS returned Sh538 million meant for promotions of health workers to the national treasury.

In an interview with the Star, Oluga explained that for the county to have a proper functioning healthcare system, issues affecting health workers needed to be addressed first.

“If you look back, hesitancy to promote health workers across different cadres was the core reason why health workers in Nairobi were going on strike.

"As NMS we made sure that those who deserve promotion get it,” he said.

Healthcare work force has been increased by 33 per cent.
Counties
9 months ago