• Mudavadi said the Treasury was planning to hand a request to Parliament to raise the debt ceiling to Sh12 trillion.

• Kenya Kwanza cautioned the Treasury CS from borrowing any further loans during this transition period. 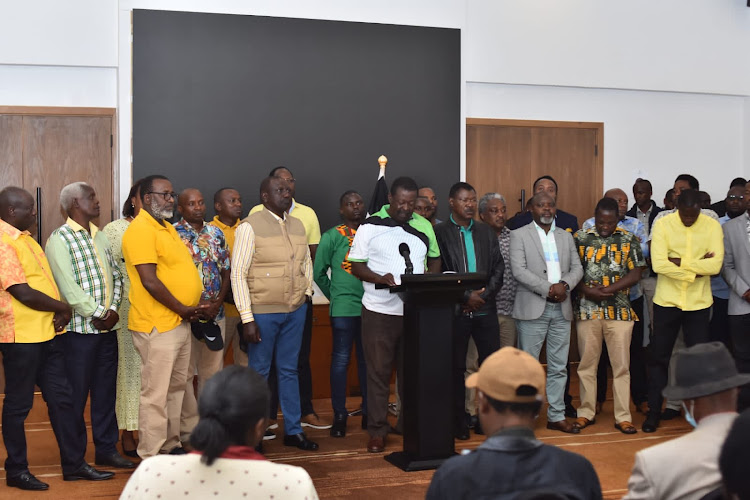 Kenya Kwanza Alliance leaders have called on the National Assembly and Senate to decline any attempts to expand the debt ceiling.

The leaders said the move was in total violation of the constitution and Public Finance Management Act, 2012.

Mudavadi, who read the statement on behalf of the alliance, claimed the Treasury was planning to hand a request to Parliament to raise the debt ceiling to Sh12 trillion.

"National Assembly and Senate must avoid any further strangulation of Kenyans with additional debt by refusing any requests for approval of a new debt ceiling," the statement said.

Mudavadi questioned whether the handshake between President Uhuru Kenyatta and ODM leader Raila Odinga was meant to burden Kenyans with debt and a high cost of living.

Kenya Kwanza cautioned the Treasury CS from borrowing any further loans during this transition period, as they asked Parliament to ensure the fiscal deficit does not exceed Sh400 billion.

The coalition insisted that Kenya does not need any constitutional changes to enable the allocation of resources to the counties.

Their statement comes days after Treasury proposed a review of the public debt limits which reverts to the old system based on a percentage of the country’s GDP.

CS Ukur Yatani, in a response to MPs on how he intended to deal with the thinning window for borrowing, said the debt should be capped at 55 per cent of the Gross Domestic Product.

Yatani on February 3 wrote to Parliament informing of the Treasury’s intention to amend the Public Finance Management (PFM) Act, 2015 to set the debt cap at the said percentages.

Yatani seeks to cap public debt at 55% of GDP

Sh3 trillion debt window has been depleted, there is only a Sh400 billion leeway before the debt cap is breached
News
9 months ago