Party says Kenya Kwanza is not an option as they go out to fish for partners.

•The party secretary general Shakila Abdalla on Tuesday said the party leader will engage with like-minded coalitions and individuals.

•The move now gives Kalonzo the green light to commit the party to either of the formations in the race to succeed President Uhuru Kenyatta. 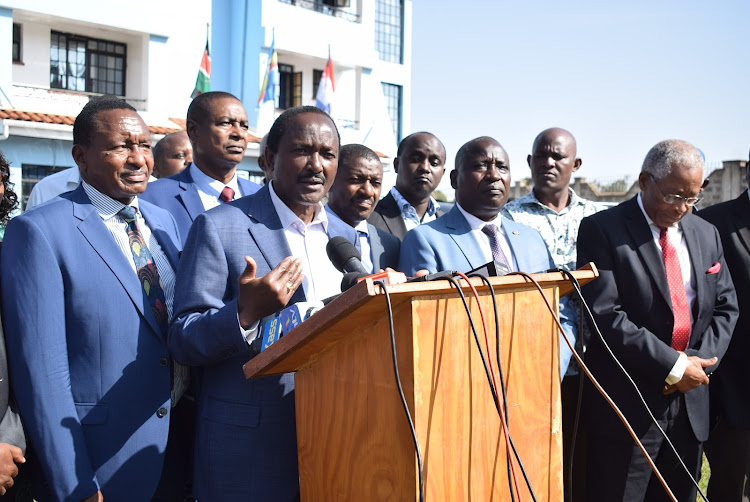 Wiper has given Kalonzo Musyoka the freedom to negotiate pre-election coalition deals with other players ahead of the August 9 polls.

“We will negotiate as equal partners,” Shakila said.

The move now gives Kalonzo the green light to commit the party to either of the formations in the race to succeed President Uhuru Kenyatta.

However, sources at the meeting told the Star Kenya Kwanza headed by Deputy President William Ruto, Musalia Mudavadi and Moses Wetangula is not an option as they go out to fish for partners.

“The negotiations are serious, we are very clear on who we are uncomfortable with,” a source who attended the meeting told the Star.

This now leaves Azimio la Umoja as the only remaining viable option for Kalonzo.

Last month, the Wiper boss alongside Oka principals Gideon Moi (Kanu) and Cyrus Jirongo (UDM) walked out from ANC’s delegates meeting at Bomas of Kenya after it became apparent, the DP was the chief guest.

Addressing the press after the six-hour NEC meeting, Kalonzo said they are open to honest talks but ruled out any deal with “thieves”.

“We had a very serious open deliberation of the party's NEC on what is happening in regards to coalition building,” Kalonzo said.

“We are ready for talks with those whose ideology is similar to ours but if you are a thief we will not engage you.”

The decision, he said, is informed by the realisation Wiper cannot go it alone in the August 9 election.

The Wiper boss told his would-be-partners to come to the negotiation table with honesty saying the party is keen not to repeat the mistakes of the past coalitions.

He said any talks will be in the best interest of the country and without any pressure.

“We don't want them to negotiate with a weapon in their pockets. negotiations should be in good faith and sincere,” he said

The Wiper leader was accompanied by over 20 MPs from his party.

Shakila said Kalonzo is fully mandated to negotiate on behalf of the party.

She said they will insist on having a solid agreement that must be honored.

Kalonzo has up to April 9 to ink a coalition deal with Raila Odinga’s Azimio but some sources told the Star the deal could be announced early enough ahead of the ODM, Jubilee NDCs scheduled for February 25 and 26.

The plan, the Star learnt, is to have Kalonzo officially join the unveiling of Raila by President Uhuru Kenyatta at the end of the twin NDCs.

This even as it emerged some politicians allied to Deputy President William Ruto are expected to defect to Jubilee during the National Delegates Convention.

On Tuesday, Jubilee’s National Management Committee and parliamentary leadership convened to finalise on the list of guests to the function.

“As far as the NDC is concerned, we agreed on operational issues on who comes for the convention and how many delegates from each county,” Jubilee secretary general Raphael Tuju said.

“We are dealing with about 4000 delegates but we are also cognisant of the Ministry of Health, Covid-19 guidelines.”

The team will meet again next week Tuesday to approve the list of guests.

“Some of those who have been declaring allegiance elsewhere are also planning to come back,” Tuju said.

Kalonzo said that Oka had been approached for a possible alliance with various parties.
News
10 months ago

Gideon said that as KANU, they will stick with OKA and support Kalonzo.
News
10 months ago

OKA will form coalition with like minded parties - Kalonzo

Kalonzo said their intention of inviting more parties to work together was within the law.
News
10 months ago
Post a comment
WATCH: The latest videos from the Star
by LUKE AWICH and JULIUS OTIENO
News
08 February 2022 - 23:00
Read The E-Paper