Kakamega governor has dismissed claims that Raila is a government project.

• Oparanya said a team of experts had already drafted the agreement and will take the committee through the document for either addition or subtraction.

• The aspirants were drawn from the five Western counties of Kakamega, Bungoma, Vihiga, Busia and Trans Nzoia. 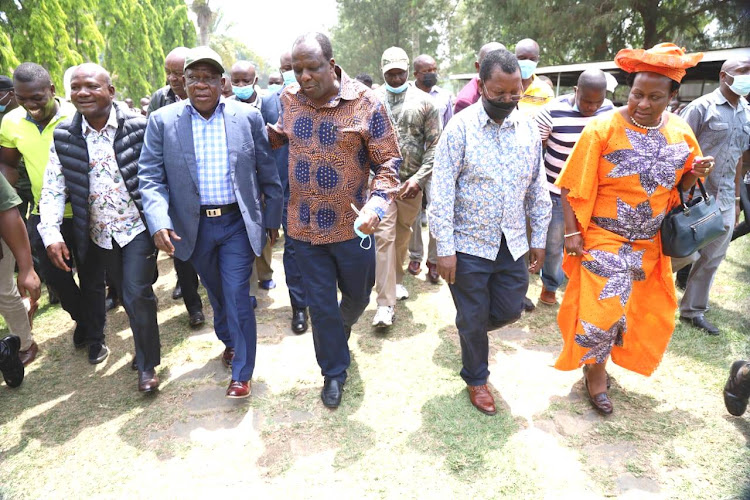 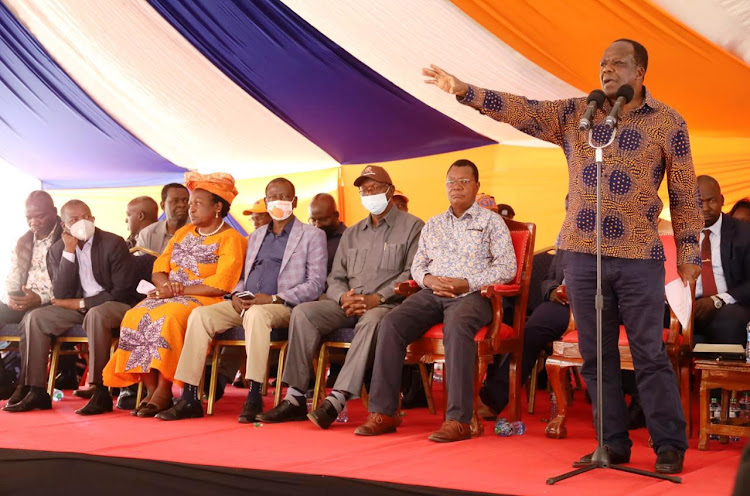 The ODM top organ will meet Friday to fine-tune the draft coalition agreement with other Azimio La Umoja parties.

Deputy party leader Wycliffe Oparanya said a team of experts had already drafted the agreement and will take the committee through the document for either addition or subtraction.

“Other Azimio parties are doing the same,” Oparanya told a meeting attended by aspirants seeking various elective seats from Western in Kakamega on Monday.

“How we are going to behave in the coalition will be communicated to you [aspirants] next meeting,” Oparanya told aspirants, who demanded to be told what the coalition agreement entails.

The aspirants were drawn from the five Western counties of Kakamega, Bungoma, Vihiga, Busia and Trans Nzoia.

Oparanya, who is the Kakamega governor, said there is no coalition agreement between ODM, Jubilee, Development Action Party (DAP-K) and other Azimio-friendly parties at the moment.

He is a member of ODM's central management committee.

Oparanya said ODM expects that parties joining Azimio La Umoja will agree to hold joint primaries and present a single candidate for every elective seat during the August 9 General Election.

“We have realised that we have lost seats we deserved to win during elections because of unhealthy internal competitions among coalition parties. We suffered during Cord and NASA coalition arrangements,” he said.

Oparanya urged aspirants to give consensus a chance before opting for universal suffrage for members to pick candidates.

This, he said, will save aspirants' expenditures during primaries, forestall fallout and guarantee Azimio coalition majority seats.

“I am going to form a special committee that will assist in hammering out consensus but will only intervene on request. It will have a chairman from outside Western,” he said.

He said the Orange Party will hold its National Delegates Conference (NDC) on February 25 and 26.

He said the conference will ratify a coalition agreement with Azimio parties and endorse party leader Raila Odinga as its presidential candidate.

Oparanya asked aspirants to hit the ground and market themselves as an opinion poll will be carried out between the last week of February and mid-March to establish the popularity of aspirants to guide the consensus process.

Oparanya also dismissed claims that Raila is a government project.

“Raila has stood for elections since 1992 and you cannot call him a project. Raila is a project of the people and not state,” he said.

He said the president has a constitutional right to support a candidate of his choice.

Oparanya said party issues will be resolved in the regions to free party leaders to look for votes.

"We need the party to be as democratic as possible to win more seats,” he said.

He said Trans Nzoia, Bungoma and Vihiga counties have unique problems which the party is planning to address.

He said ODM and DAP-K have agreed there should be no movement of members across the two parties.

“We have agreed that we shall have an agreement with DAP-K so that efforts by DAP-K is not wasted and vice versa,” he said.

Welcome to Azimio but respect early birds - Kibwana to Kalonzo

Two groups held separate rallies within the city and not all was peaceful.
News
11 months ago

They are expected to agree on method of nominations to avoid ill will; aim is consensus
News
11 months ago
Post a comment
WATCH: The latest videos from the Star
by HILTON OTENYO Correspondent, Western Region
News
08 February 2022 - 22:00
Read The E-Paper