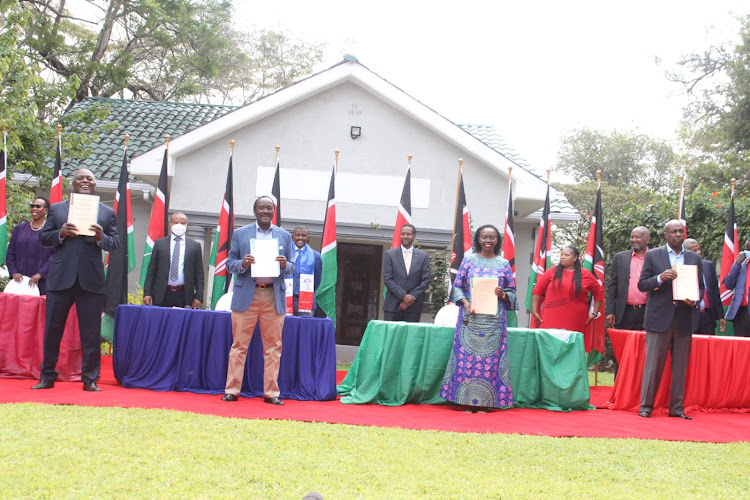 The Star has established that the President has held at least two closed door meetings with the two former Nasa chiefs in a frantic attempt to persuade them to join forces ahead of the August 9 polls.

The first meeting, attended by Kalonzo, Gideon, Karua and Jirongo was held at State House on Monday.

It was followed by another one on Tuesday night which was attended by Raila, Kalonzo and two of their close allies at the same venue.

Sources close to the two leaders intimated the meetings were tense with Kalonzo said to have demanded to know why Raila could not support him, for the country’s top seat, instead.

“The discussions were thorough. He (Kalonzo) wanted to know what is in store for him. But at the end they agreed,” the source said.

On Wednesday, Kalonzo admitted he has been approached for a possible political deal with Raila’s Azimio la Umoja movement.

“That assertion (of joining forces with Azimio) has been there and that is why we are saying we are open to like-minded political formations,” he said.

He added, “But the mode of engagement in that kind of dialogue shall be open, inclusive, transparent and fully consultative.”

Tellingly, Kalonzo outrightly dashed any possibility of teaming up with Deputy President William Ruto’s Kenya Kwanza Alliance which he ridiculed as "Kenya Kwisha".

The former vice president said their alliance (Oka) was open to negotiations with like-minded political formations.

There have been speculation about Kalonzo and Oka’s next political move after the sudden exit of their colleagues ANC leader Musalia Mudavadi and Ford Kenya boss Moses Wetang'ula.

The two have teamed up with Ruto under Kenya Kwanza Alliance that is set to face Raila’s Azimio in the coming polls.

Kalonzo has often ruled out re-uniting with Raila whom he has supported as running mate in both 2013 and 2017 general election.

But with the diminishing options and the president’s personal involvement, a reunion with the former Prime Minister is closer to reality.

Kalonzo disclosed that his party and the others in the alliance have lined-up national executive committee meetings to discuss the ‘approaches’ before taking a position.

“I am aware that Kanu will have their NEC in the next few days. Wiper as well will have NEC in the coming few days. UDP will also be moving in that direction,” he said.

“We want to meet every member of NEC. They will have their free say in one way or the other then we will take a position,” Kalonzo added.

The Wiper boss addressed a press conference during the signing of Oka deal alongside his co-principals at his SKM Command Centre in Karen, Nairobi.

In a joint statement read by Gideon, the leaders said they were open to negotiations with other political formations that share in their ideology that includes zero tolerance to corruption.

“This shall involve structures and open negotiation which must include resolution of the country’s crippling debt portfolio and discussion on exploration of our natural resources to address the debt and create employment,” they said in the statement.

Both Raila and Oka bosses have attacked Ruto, describing the DP as a corrupt leader who does not deserve to be elected as president. He has often dismissed the accusations.

Karua said the Mt Kenya Forum, a group of political leaders from the President’s backyard, which she leads as its spokesperson, will be part of Oka.

However, Tujibebe Wakenya party leader William Kabogo, who is the part of the forum and has be moving around Oka, attended the ANC’s National Delegates Conference meeting where Mudavadi announced joining forces with Ruto.

Kalonzo and Gideon stormed out of the meeting after learning that the DP was expected to grace the assembly.

“We must all agree that a coalition is not a jail where doors are closed. The doors remain open for like-minded partners and everybody is free to exercise their freedom, but I think we are on solid ground,” the Narc Kenya boss said.

The leaders signed a deed of assignment to officially have the four parties own the name Oka and work together under the alliance.

Initially, only Kalonzo’s Wiper had exclusive legal right to the name Oka as it was reserved by the outfit.

At the briefing, the leaders announced they will deposit the coalition agreement with the Registrar of Political Parties Ann Nderitu on February 28.

This will pave the way for the official unveiling of the coalition that currently brings together four parties.

“We will officially and publicly unveil the Oka coalition and demonstrate how our vision will fundamentally transform Kenya as a build up to the official unveiling,” Gideon said.

They have lined up a series of political rallies across the country to market the coalition and its aspirations ahead of the election.

Post a comment
WATCH: The latest videos from the Star
by JULIUS OTIENO AND MANAL SHAMI
News
02 February 2022 - 23:00
Read The E-Paper