Raila is not fit to be president, he can't be trusted - Ruto

Ruto accused Raila of giving handouts to youths saying it was a sign of disrespect.

• "We are not ready to conduct an experiment with a person no one can trust."

•He urged the people of Embu to remain united and choose leaders of their choice. 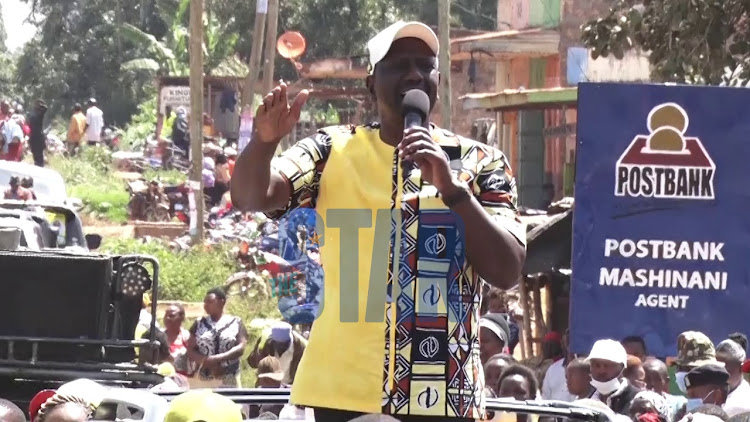 He also condemned Raila for promising jobless youth the Sh6,000 handout, claiming it was disrespect to the Kenyan youth.

Speaking at Kibugu in Embu on his "Kenya Kwanza" tour to the lower eastern region on Saturday before proceeding to Kirinyaga, Ruto said that Raila had let down different leaders in the past and nothing can guarantee Kenyans his trust.

"We are not ready to experiment with a person no one can trust," Ruto said.

Ruto, who was accompanied by his new allies ANC's Musalia Mudavadi and Ford Kenya party leader Moses Wetang'ula, accused the Azimio la Umoja movement leader of being behind the downfall of Jubilee projects in Embu County.

"In our Jubilee manifesto, we had planned to construct three dams in Embu, but since handshake, everything fell apart," he said.

He urged the people of Embu to remain united and choose leaders of their choice.

Ruto said the ODM leader should consider offering the youth something different and not promising to give them handouts.

"I respect Raila, but I urge him to respect the youths too. They want to be empowered and not given handouts."

On his part, Moses Wetang'ula said he is looking forward to a united Kenya.

He said he had worked with Raila, and he cannot be easily trusted.He said Raila had fallen out with most of his former allies, including DP Ruto and Musalia.

The Bungoma Senator said Raila should know that it is the citizens who had the power to decide on who will be the president and not the deep state.

"He is being blackmailed by some leaders, and I tell him Kenyans are the only option," Wetang'ula said.

Mudavadi said that the Kenya kwanza objective is to ensure Kenyans enjoy a stable economy which has been dwindling over the recent years."We have to ensure our number one agenda is to stabilize the Kenyan economy. Kenyans lives matters most more than our individual lives," said Mudavadi.

Ruto will campaign in Kirinyaga while Raila will be in Murang'a county.
News
5 months ago

Ruto said the key agenda to unite the country is not for the benefit of leaders.
InPictures
5 months ago
by BENJAMIN NYAGAH
News
29 January 2022 - 15:24