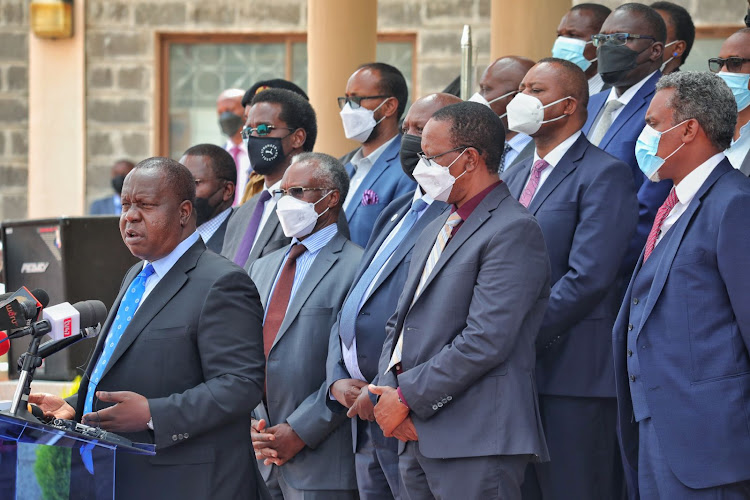 President Uhuru Kenyatta will on Friday meet security chiefs to discuss the preparedness towards August elections.

The meeting at State House in Nairobi will bring together all regional police commanders, regional commissioners, intelligence officials and county commanders.

The meeting is expected to discuss the security situation in the country and the coming campaigns and elections.

The President wants to hear how prepared the team is ahead of the gruelling period amid growing terror attacks in parts of Lamu county.

Uhuru will then chair the National Security Council in another meeting on election preparedness.

The meeting comes days after Interior Cabinet Secretary Fred Matiang’i said the country is safe and ready to hold the polls. He said unlike the past when there were tribal groupings that were political, there is no such trend.

“We are ready for the elections so far. The police have presented their reports on the preparedness of the polls and we are content we are ready,” he said.

Matiang’i also said terrorism remains a threat in the country and urged the public to continue being vigilant.

“Don’t drop the guard. The threat is real and out there. We have disrupted many terror plans through public cooperation, but we urge for continued help to tame this problem,” he said.

The CS spoke after meeting a multi-agency team to discuss election preparedness in the country at the Kenya Institute of Curriculum Development on Monday.

He blamed bribery, handouts and unmet promises on electoral violence witnessed in parts of the country.

The CS said there have been four incidents of violence in the past few months and they were all linked to handouts and unmet promises.

“It is not the job of police officers to mediate disputes of handouts or failed promises. Let us have decent campaigns and be responsible,” he said.

“The endemic false promise of money to the people, incredible amount of bribery and failing young people and sometimes mismanaging those organisations on the ground and causing conflict remain a challenge.”

He said the team will henceforth be meeting monthly to review the election preparations.

He said they will increase police deployments across the country.

Police in the past have been blamed for some of the violence witnessed in the country.

For instance, NPS was criticised for using extreme force on opposition supporters over the past four months leading to and after the 2017 general election.

There have also been concerns that some police officers are suffering from psycho-social issues, which are affecting the service’s image.

Areas deemed to be flashpoints for violence have been mapped and police will be ready to avert a repeat of 2007-08.

After the presidential result of the 2007 general election was disputed, violence erupted, leading to the death of more than 1,000 people. Many others were displaced.

An inquiry into the post-election violence pointed to the police as being ill-prepared, partisan and heavy-handed in trying to quell the chaos.

The police are using intelligence and preparing for various scenarios that could play out based on various stages in the exercise.

Bribery and unmet promises to voters blamed for electoral violence

The CS said they are prepared to handle the August polls.
News
3 months ago

• “We as a commission don’t want to be stumbling block to anyone and thus we are appealing to all contesters to just comply with laws in place,” ...
Counties
3 months ago
by CYRUS OMBATI Chief Crime Reporter
News
27 January 2022 - 23:00