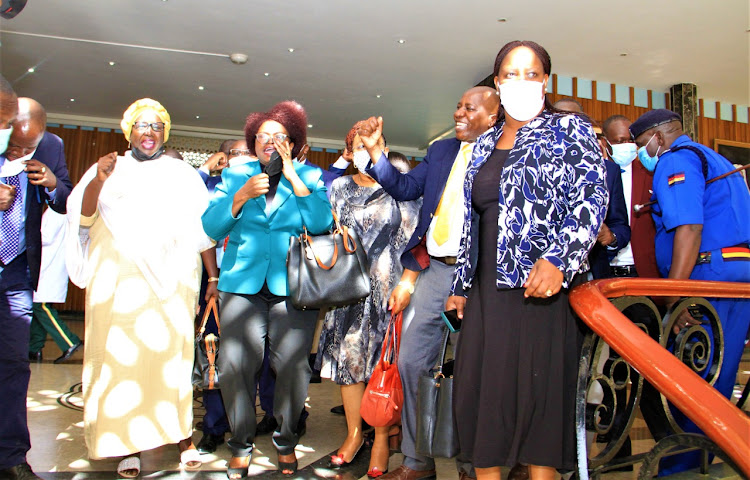 The anti-handshake MPs rejected a motion for the reconstitution of the House Business Committee, which queues business to be transacted, dealing a blow to President Uhuru Kenyatta's legislative agenda.

The MPs voted to shoot down the names that were moved by Leader of Majority Amos Kimunya as part of the procedure for resumption of sittings.

They broke into song and dance,chanting “earthquake” after the House was adjourned, a majority saying they would concentrate on their reelection campaigns.

The National Assembly technically remains adjourned until further notice unless the deadlock is resolved, amid questions on how the handshake side let down their guard.

A number of handshake-allied MPs were not in the House when the question was put by Speaker Justin Muturi, hence, there was a lack of numbers to overturn the decision.

The development, if not remedied, stands to cause a crisis in the operations of the government as the motion can only be re-introduced after six months.

Speaker Justin Muturi said in the ensuing circumstances, there would be no business for the House to transact.

“Members, you don’t have to wait for [IEBC chairman Wafula] Chebukati to do anything else. For the time, you have resolved the matter for him even though officially you may not sit beyond 60 days to August 9,” he said.

Muturi referred the issue to the leadership of the House to sit and propose a motion in line with Standing Order 49.

The leaders retreated to a crisis meeting after the events and promised to issue a statement once a way forward was arrived at.

The House rule says that, "No motion may be moved which is the same in substance as any question which has been resolved— affirmative or negative—during the preceding six months in the same session."

However, despite the rule, a motion to rescind the decision on such a question may be moved with the permission of the Speaker, the only remedy in the case.

But a motion to rescind the decision on a question on a special motion— impeachment or petition to the government—shall not be allowed.

“Unless the leaders are bringing to me a motion which complies with Standing Order 49, there may be no need for the House to sit,” Muturi said.

“Let the leadership consult with members and see how best you want us to proceed. Otherwise, we will not be able to do any business.”

“The House stands adjourned until the Speaker is moved by either the Majority party or Minority party on a motion based on Standing Order 49,” he said.

Budget-making is among the crucial businesses that have been affected by the rejection of the proposed nominees to the committee.

In it were proposed allocations to ministries, state departments and agencies. The House was also due to consider a second supplementary estimate.

Sirisia MP John Waluke revealed that they met on Monday night as UDA, ANC, and Ford Kenya MPs where they resolved to paralyse House business.

"We did this to pay back for the events of the passage of the parties bill and the non-invitation to State House meeting," he told journalists.

Their handshake counterparts faulted the move saying much as the Tangatanga team wants to show their might, they shouldn’t stall government business.

“We have been in opposition for years and we have never made such a horrible move. We don’t cause problems for all Kenyans,” the ODM MP said.

“When you scuttle House business, you are not punishing members of the handshake or my party leader Raila or President Kenyatta but punishing all Kenyans,” Amisi added.

He was joined by his Mvita counterpart Abdulswamad Nassir who said the move was not parliamentary, saying it contradicts the claim Tangatanga was helping Kenyans.

“By them refusing those names, there is nothing that is going on in Parliament,” he said.

“The truth needs to come out. When people say they are for the common mwananchi, how will they help them when the government is not spending?” Nassir asked.

Following the rejection of the names, some MPs argued the leaders may have to prepare a fresh list and propose the same to the Speaker.

Standing Order 171 anchors the committee chaired by the Speaker with Leader of Majority, Minority Leader, Whips, and seven MPs nominated by parliamentary parties and approved by the House as members.

“The names should reflect the majority of the seats held by the parliamentary parties and taking into consideration the interest of independence,” the Standing Orders read.

“I have always directed that there must be independence. The names which were rejected have complied with that,” Muturi said.

“We have always fairly included the independence and nobody can fault even the leadership of both sides,” Muturi said. “For me, it is just to declare that there will be no business.”