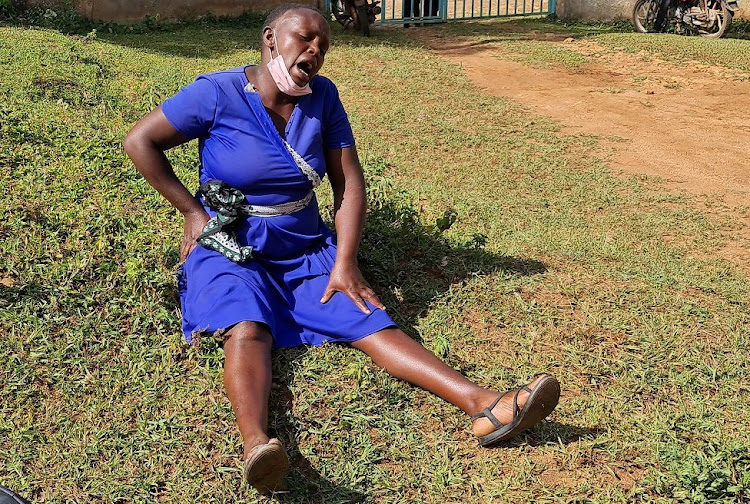 Irene Waheto mourn at Yala mortuary after spotting the remains of her brother who's been missing for long. /FILE
Image: BBC

A human rights group has renewed the push to have the 2017 coroner’s law operationalised to make identification of unknown dead bodies easy.

The Independent Medico-Legal Unit said if the law that was already assented to by President Uhuru Kenyatta was in force, a coroner would have been appointed to help the families of victims of River Yala body dumps identify their loved ones faster.

The law is called Coroner's Services Act of 2017.

The Attorney General's office is yet to publish regulations that give the law powers, five years down the line.

The renewed push comes in light of the latest news that two more bodies were confirmed to have been retrieved from River Yala on Tuesday.

More than 23 bodies have been removed from the river as of mid-January.

Most of them had decomposed beyond recognition. A few have been identified and their loved ones claimed them.

Yala mortuary is reportedly full and the newly discovered bodies have remained at the river bank.

Haki Africa executive director Hussein Khalid and activist Boniface Mwangi returned to the mortuary on Tuesday to accompany the family members who want to inspect the bodies to see they are of their missing loved ones.

The two witnessed the retrieval of the two additional bodies.

Many families, including that of Jack Anyango Ochieng' who was among the four men disappeared in Kitengela in April last year, have trooped to the mortuary to search his body.

Many families visiting the morgue are asked to part with vast sums of money to have postmortem and DNA examinations done to identify the bodies.

But Imlu said that had the law that required a fully-resourced Coroner General's office established and devolved to the counties, identifying the unclaimed bodies would have been easier.

The law also established the National Coroner's Service whose CEO is the Coroner General.

The speed would help relieve the pain and anxiety on the families, Imlu said.

"As such, we recommend that the Coroner’s Service Act be set up to undertake investigations on reportable deaths to recommend pertinent ways of dealing, such as a DNA data bank for safe evidence," it said.

The Act creates a mechanism for mandatory reporting of reportable deaths and complements police investigation with forensic medical science by establishing a Coroner’s Service.

Under the Act, the Coroner General would be the one conducting investigations on the deaths, and be represented by a coroner at each of the 47 counties.

In a series of comments, Imlu said the law would be helpful in investigating deaths, not as in the current case where the DCI office is charged with investigations even where fellow police officers are suspected to be responsible.

"The Act expands the categories of deaths to be investigated to include cases of forced disappearance, while giving absolute control of the deceased’s body to the coroner until the disposal stage," it said.

After conducting all the forensic investigation and autopsy on every suspicious deaths, the Coroners office are required to share details on the identity of the coroner, the deceased person, where the body lies, the circumstances surrounding the deaths and measures to be taken to prevent such deaths.

"These reports are deemed to be legally sufficient to establish facts unless disproved. Where a need is, the report shall be presented to a magistrate with clear recommendations on the next best steps."