Ruto urged his competitors to stop giving excuses on violence.

•He said Raila should look for another manifesto. 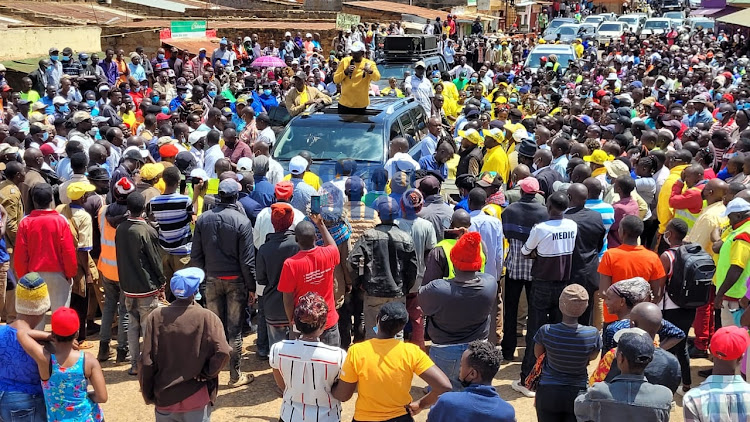 Ruto urged his competitors not to continue to give excuses about violence.

"I want to urge my competitors to ensure that in our election equation there is no violence," Ruto said.

He spoke during UDA public rally at Kangundo Town in Machakos County on Thursday.

"The ODM leader must disown violence. He cannot continue to give excuses about violence," he said.

"And those who have a good track record of violence must give Kenyans an undertaking that they will not use violence during the campaign period and when they lose in the August 9 elections," he added.

They dismissed claims by ODM that UDA was behind the violence to earn sympathy.
News
1 year ago

According to Ruto, they must commit that they will accept the verdict of Kenyans and that they won't swear themselves in.

"They will pack their small bags and go home," he said.

Ruto further said Raila should look for another manifesto. "Handouts cannot give you votes."

The DP said Kenyans want peaceful elections and that nobody will force them to make voting decisions.

He said some 160 MPs had joined the party and urged Kenyans not to allow themselves to be divided because of political differences.

"We want Kenyans to unite and work together and form a government that will serve everybody," he said.

DP William Ruto is still well ahead with 46.1% support, according to the latest Radio Africa poll.
News
1 year ago
Post a comment
WATCH: The latest videos from the Star
by GEORGE OWITI
News
20 January 2022 - 14:49
Read The E-Paper