From grass to grace: Story of Captain Webster Otugha 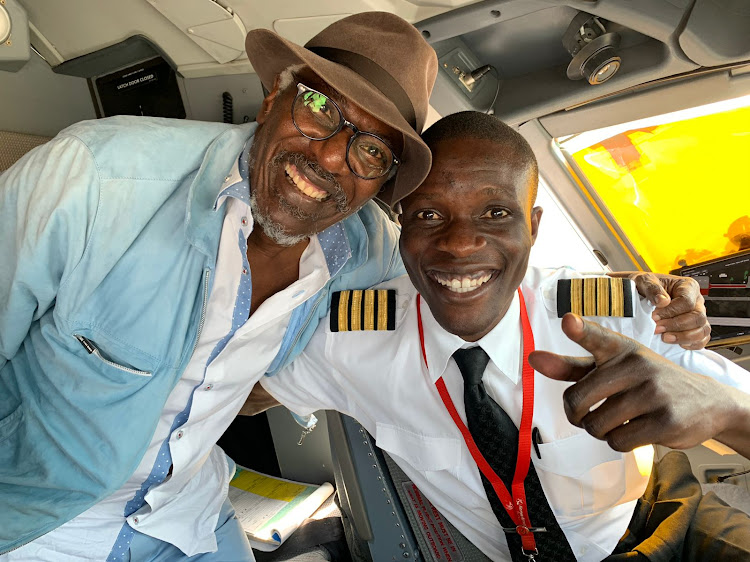 Webster Otugha is a passionate evangelist, music enthusiast and pilot with Kenya Airways, where he is a captain. The story of his journey through life is that which validates the hackneyed statements, "Wherever you come from, your dreams are valid" and "Never give up". Here is his roller-coaster story.

Growing up in Kendu Bay, in the then Kosele district, Webster, as he is fondly called by his associates, was the best pupil in his primary school, Sony Complex in Homa Bay county. He served as a playwright for a drama that wowed all and sundry from within his school and without, and raised his reputation in the village.

"I didn't see the play being as good as the teachers and fellow pupils saw it. However, I borrowed widely from my grandmother's stories and the Bible," he said.

He won admiration from teachers thanks to his stellar performance in class and drama. He always topped in class and his future looked great, but something seemed to stand in his way: poverty.

"I always wanted to go to Starehe Boys Centre and School because it covered the expenses of bright but needy students," he said.

"I had taken care of performance and marks, and I only needed an assurance of getting a chance at Starehe."

However, when he sent in his application to enrol at the school of his dreams, he was turned down. He was not an orphan and that struck him out. Then his favourite teacher, Antipus Magero (now the late), who badly wanted him to make it to Starehe, went the extra mile.

"Teacher Magero was well connected and he knew big shots in the Education ministry," he said.

"I remember after the initial rejection from Starehe, he spoke with the then principal of Asumbi Girls' School to help me get to Starehe, through the Catholic Church's help. Before then, he had gone to the ministry offices in Nairobi and had my first high school choice changed from Starehe to Mang'u."

The second phase of pushing a boy closer to the realisation of his dreams began in earnest. The Asumbi Girls' principal got the application documents to retry the process. All was well but the unexpected happened and thwarted the process.

"The headmaster of my school refused to sign where he was supposed to. My father implored him to but he refused. He said he wanted me to go to Mang'u High and do aviation so I could be a pilot," Webster said.

"That really broke my heart big time because even if I got called to Mang'u, there was no money. Nonetheless, there was nothing more we could do, and I settled for fate." 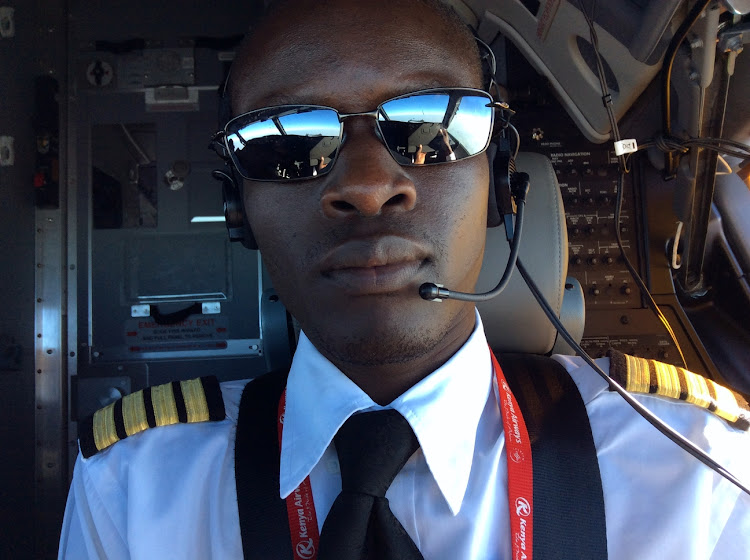 Webster at the cabin
Image: COURTESY

As fate would have it, Webster qualified and joined Mang'u High School in 1998 in Form 1, and selected aviation as one of his technical subjects.

"I chose to do three sciences, geography and aviation because they were what I needed for the job. Now that I had come this far, I wanted to follow this aviation dream and quench my thirst and that of those who believed in me," he said.

In 2000, a Kenya Airways Airbus plane crashed in Abidjan. That crash was a blessing in disguise for Webster, who was thousands of miles away in Thika, Kenya. After the crash, the company (Kenya Airways) bought a replacement plane and invited students of aviation from high schools in Kenya for an experience flight.

"The teacher chose students based on their performance in the subject in the previous term. Some from the Aviation Club were also chosen. For me, I was chosen because I was a senior official in the club and also good in the subject," he said.

"I remember the flight experience like yesterday. There we were, students from Mang'u, Alliance, Kabarak and Maseno, all joyous and jubilant. We took off from the Jomo Kenyatta International Airport, flew south to Tanzania, went round Mount Kilimanjaro, came back to the Kenyan Coast, did an approach, flying low enough to see the ground...then we flew along the Kenyan Coast to Malindi and returned to the JKIA," he recounted.

"According to them, that was a short flight, but for us, it was a very long flight with indelible memories."

As though nature was constellating to communicate a message and confirm his future, a year later, he had an almost similar experience. This time, Kenya Airways decided to do away with the France-manufactured Airbus fleet and introduced the American-made Boeing fleet. Once again, KQ invited students of aviation from select high schools and Webster was on the list.

"This experience was more exhilarating than the former one because we were treated as guests. The Minister of Transport and other high-ranking government officials were there at the handover ceremony. Then we were also there, soaking in every bit of that beautiful moment," he said.

Webster says this was the experience that made him settle for flying in the vast territory of aviation.

"I had always wanted to go into aviation as an engineer but this particular experience was the ultimate game changer," he said.

"I asked to go into the cabin and I was allowed. There, I talked with the captain and the first officer. They were both wearing blazers with four golden stripes. I looked at my school blazer. It only had two stripes. I said, 'Someday, I will add two more stripes.' The fact that the first officer, Irene Mutungi (now a captain) was a lady encouraged me even more."

Back in school, Webster had accumulated fee balances that ran into thousands. Sometimes when things stretched too far, he worked to help his parents pay the fee.

"I was always in the fee defaulters list throughout my days in school," he said.

"My parents were really struggling but they could only afford a little after a long time. I even enrolled in the school work programme, where I stayed behind during holidays to work in school. The money we were supposed to be paid was channelled into our fee accounts."

Regardless of his permanent presence in those with fee balances, he says he only went home to fetch fees once in his four years in school.

"I was always given the exeat sheet but I didn't go home. Instead, I went to the principal's office and pleaded with him to let me stay. I remember telling him if getting fare to and from home was a problem, could I ever return with the fee? By God's grace, he always listened to me," he said.

In 2001, while in Form 4, something he regards as a miracle happened. His then class teacher, Belden Ochieng, forwarded his name to a certain bursary kitty, and that paid his first term and KCSE registration fee fully.

"When I learnt about this, I cried and poured out my heart to God with Thanksgiving. By the way, Mrs Ochieng told me she was the one who worked behind the scenes to help me get that bursary 15 years later," he said.

Despite his tough financial background and the stress that that brought, he managed to score a mean grade of A-minus, with A plains in mathematics, physics and aviation. He then started teaching high school kids in Nairobi.

He applied for a degree programme in mechatronics at JKUAT because there was no local university offering aviation back then, he said. Meanwhile, he tried to go seek an internship at Kenya Airways while awaiting to join university but he was denied a chance. However, a year after he completed high school, Kenya Airways was looking for young people to train as pilots.

"I applied and took the letter in person to the company so it could not get lost in the postal office," he said.

"It was in October and we were told to wait for feedback by January the following year."

Time passed by and no response came. He chose to try his luck in the Kenya Air Force, which was also seeking recruits.

"I went to Kosele for the physical exercises. I was fit and agile, and so I passed all of them. Just when I was about to be given the green light to progress to the next phase, another officer called me and said I had a skin disease, and he struck me out. Just that way, a heat rash on my neck thwarted my dreams of joining the Air Force. I couldn't believe it," he said.

Months later in 2003, a call came from Nairobi, requesting him to travel to Kenya Airways for interviews. He had been shortlisted. He travelled to Nairobi hastily and did a series of three interviews, which he passed.

"Interestingly, the interviews had largely borrowed from the things that I was teaching those high school kids in Nairobi. It was a very sweet revelation," he said.

After the interviews, he was required to bring his academic certificates, including the KCSE one. It was held in school as a result of his fee balance.

"I went to the principal, who was a new one now, and asked him to give me the certificate I take it to the company they verify and then I return it. But he was good enough and he wholeheartedly gave me the document," he said.

"I promised to pay the balance as soon as I was able. A few years later, I went back and settled my balance, much to the surprise of the principal." 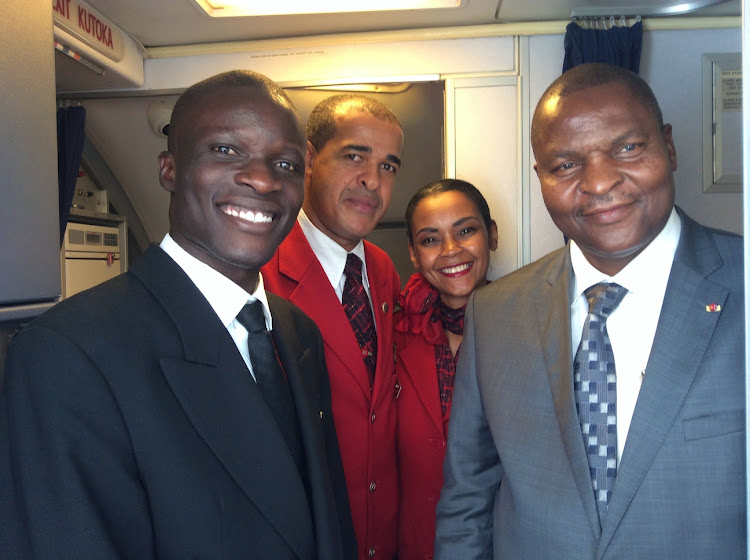 "I flew President Kibaki from London to Nairobi. I also flew President Faustin Archange of the Central African Republic, among many other key dignitaries, including Alpha Blondy, the international reggae star," he said.

"I have also flown cargo planes loaded with cash of up to 16 tonnes of money. Such flights, just like those of dignitaries, are accorded top-notch security."

His scary moments are when he flies to West Africa during the rainy seasons.

"West Africa is characterised by serious storms during the rainy seasons. The storms can get so nasty that sometimes, we are forced to abort landing or reroute. We thank God there has never been an extreme incident. We always get away successfully," he said.

"And one thing with flying is that you have to handle every flight as if it's your first one. You can't take chances. You must be careful to protect your life and those of the hundreds of passengers you are carrying."

Webster says he has two duty rosters each month, one of work and another in church. He is a chaplain under Newlife Seventh Day Adventist Church.

"I needed the Lord when I was in school. We were ministered unto. Today's kids also need to hear the message of the same God," he said.

He evangelises in high schools and colleges and universities, whenever duty calls.

"The work is great that it can't be finished by pastors alone. That's why I joyfully take part," he said.

During his free time, Webster watches nature documentaries and listens to KBC. He also enjoys singing alone in the shower room, he says.

"Songs such as 'If we ever needed the Lord before' and 'How beautiful heaven must be' always uplift my soul, the way they did many years back in high school," he said.

As a parting shot, he has a message to one and all.