Mwendwa was charged and pleaded not guilty. 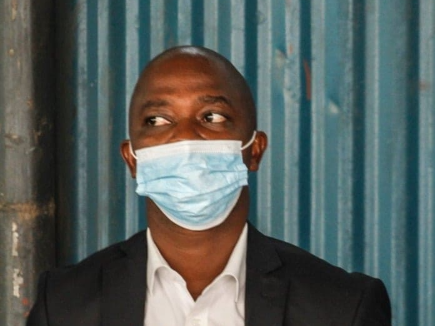 Nick Mwendwa has resigned as the Football Kenya Federation president.

In a letter to the National Executive Committe on Tuesday, he said, "In light of the foregoing, specifically, the frequent arrests and detentions, which have adversely affected my family and personal business and whilst I am confident I will be cleared of any wrongdoing in the end, I have today in accordance with Article 42(8) of the FKF constitution (2017)asked my Vice President Madam Doris Petra to assume all functions of the FKF president."

"Taking into consideration that I am personally being targeted in all this, my decision, has been arrived at with the federation’s best interest at heart."

Mwendwa had earlier on Tuesday lost a bid to block his prosecution.

He was charged with Sh38 million fraud.

Mwendwa was barred from accessing FKF offices, contacting witnesses and publishing in the media anything regarding the case.

The case will be mentioned on December 20.

Mwendwa had been in police custody since Friday afternoon.
News
1 year ago

Mwendwa had been in police custody since Friday afternoon.

He was detained at Gigiri police cells where he was Saturday picked from for further statement recording and taken back.

Prosecutors in the case asked for the file on the probe from police for perusal and action ahead of the planned arraignment.

His lawyer Eric Mutua said he was aware the prosecutors were in discussion with the police over the new developments.

Mwendwa was driving along Kiambu Road to the CBD when his car was blocked.
News
1 year ago

Mutua said police informed him they will file a charge of alleged misappropriation of Sh8 million from the federation.

Mwendwa was arrested along Kiambu Road on November 26 as he drove to the city centre and taken to the Directorate of Criminal Investigations for grilling. This was a day after he was set free by the court.

Mwendwa was initially arrested on November 12 and spent a weekend behind bars before being released on a bail of Sh4 million as investigations continued.

Nairobi magistrate Wandia Nyamu dismissed the application after prosecutors, who had applied for seven days to enable them to conduct investigations, sought to close the file against him.

The magistrate ordered Mwendwa be refunded his bail payment. Mutua wrote a protest letter to the Inspector General of Police (IG), Director of Public Prosecution and the DCI over the new arrest.

“While Mwendwa was being driven by along Kiambu Road, his vehicle was intercepted by two unmarked vehicles, bundled into one of them and taken to DCI headquarters where he is being detained,” Mutua’s letter says.

DPP had been given 7 days to prefer charges against Nick but chose to close its file.
News
1 year ago

Theatrics of Kenyan football turn the country into a laughing stock

Fifa has already threatened to impose a two-year sanction if the government fails to rescind the decision it made earlier in the month to current ...
Sports
1 year ago

“The arrest of Mwendwa is a clear manifestation of abuse of both police powers and criminal justice system, whose ultimate aim is to intimidate Mwendwa in order for him to abandon his pursuit of a civil dispute over management of Football Kenya Federation.”

Sports Cabinet Secretary Amina Mohamed disbanded the federation on November 11 and constituted a caretaker committee to run football in the country for not more than six months following recommendations of a probe team that investigated the federation.

Amina said police would investigate the federation and all those found to be culpable of misappropriating funds charged in court.

FKF however challenged the appointment of a caretaker committee in court and Justice Hedwig Ong’udi will deliver a ruling on the matter on December 16.

Post a comment
WATCH: The latest videos from the Star
by STAR REPORTER The Star
News
30 November 2021 - 21:49
Read The E-Paper