•  Golabi, who is suspected to be an Iranian intelligence officer and works with a team of Kenyans to gather intelligence against establishments.

• There was no immediate comment from the Iranian government. 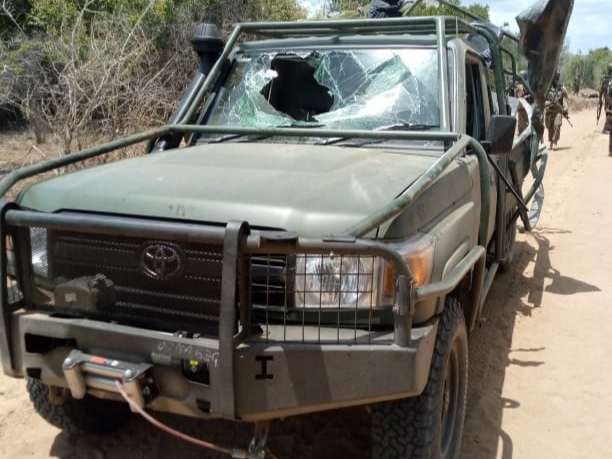 A military vehicle that ran over an IED in Lamu East in October.
Image: FILE

A recent report by Kenya’s security agencies has linked an Iranian citizen, Mohammed Saeid Golabi, to terror activities in Kenya and in the neighbouring countries.

Golabi, who is believed to visit Kenya and the region frequently, is reportedly at the core of terror plans targeting both local and Israeli interests in Kenya.

Multiple police sources have told the Star that they have been monitoring Golabi’s terror activities and some of his local associates and they are convinced that there is a link between him and terrorism activities.

“We have profiled him and his contacts over time. We have enough reason to believe that he has been working with those terror groups,” said a senior official at the Anti-Terrorism Police Unit.

Golabi is suspected to be an Iranian intelligence officer and works with a team of Kenyans to gather intelligence against establishments both private and state owned with the aim attacking them.

There was no immediate comment from the Iranian government.

State to put new measures in wake of terror threats

They include imminent re-deployment of the KDF to South Sudan.
News
1 year ago

The three runaways were recaptured on their way to Somalia to rejoin Somali based al Shabaab terror group.

Recently, President Uhuru Kenyatta called upon security agencies to heighten surveillance and other security operations to keep the country safe from external and internal threats.

“We have scaled up our operations and investigations on some of the leads we have. We are constantly on the look out considering that we have been attacked before,” said DCI boss George Kinoti.

This isn't the first time Kenyan authorities have linked would-be attacks to Iran.

In 2012, two Iranians were charged with preparation to commit a felony and possession of explosives without a licence.

Kamiti terrorists flown to Nairobi, back to their cells

They are expected to get extra charges of escaping from lawful custody.
News
1 year ago

Court documents indicated that the pair led security officials to 15kg of RDX explosives hidden at a golf club in Mombasa.

The suspects, Ahmad Abolfathi Mohammed and Sayed Mansour Mousavi, both denied the charges, said they were wrongly accused and alleged that police had tortured them, according to court transcripts.

Abubakar Sadiq Louw, 69, and Yassin Sambai Juma, 25, were accused of terrorism and espionage on behalf of Iranian state intelligence.

The pair "admitted to conspiring to mount terror attacks," with the government asserting that the men's targets "included hotels in Nairobi frequently used by Western tourists, businessmen and diplomats."

Described as a senior figure in the Shiite Muslim community in the capital of Nairobi, Louw was working on behalf of the Quds Force, an elite unit of Iran's Revolutionary Guard that has carried out covert operations in other countries, the agencies said. Juma was allegedly one of the students Louw recruited.

According to The New York Times of February 15, 2021, Ethiopian Intelligence, with the cooperation of other friendly intelligence and security organisations successfully uncovered a cell of 15 people and recovered a cache of weapons and explosives.

The newspaper further quotes American and Israeli officials who accused the Iranian intelligence service of having activated a sleeper cell in Addis in the fall of 2020 to gather intelligence on United States of America and Israel.

Besides Addis, intelligence also indicated the existence of another group that had been preparing to attack the UAE Embassy in Khartoum raising the fear that terrorism funders are determined to cause chaos in the region.

Concerted efforts by Kenya’s security agencies seems to have significantly reduced the number of terror attacks in the country.

They have also been able to foil a number of terror plots, the latest of which is the August 2021 Likoni ferry terror plot where a multi-agency security operation led to the arrest of two terrors suspects, a Kenyan national and Tanzanian citizen who are believed to be al Shabaab returnees.

The security report further indicates that heightened counterterrorism efforts by the Kenyan security agencies have eroded operational spaces for local criminal elements with links to al Shabaab and other terror operatives.

Despite being an important arm in crime and violence prevention, the CPA hasn’t taken off in the counties.
Opinion
1 year ago
Post a comment
WATCH: The latest videos from the Star
by STAR TEAM The Star
News
28 November 2021 - 08:38
Read The E-Paper