Your time is up, Ruto tells inciters

Says any leader worthy of leadership should not incite voters.

• The DP added that any leader worthy of leadership should not incite voters to fight against one another.

• Ruto said that the hustler nation believes that politics is not about conflict but bringing people together to move our society forward. 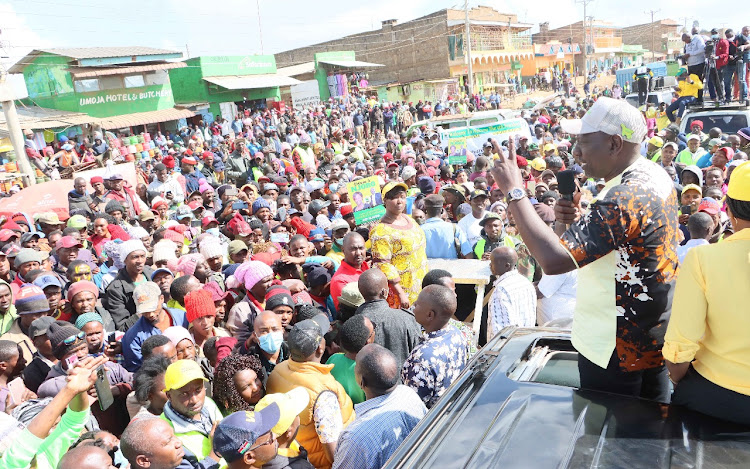 Deputy President William Ruto has said the country will not go back to the dark days characterised by political turmoil.

The DP said on Thursday during his tour to Nakuru county that it is unfortunate that some of the politicians are still engaging in politics of hatred and violence.

"...your time is up and we will not allow you to incite Kenyans against one another for your own political benefits," Ruto said.

Ruto said some of the politicians who were in positions before incited communities, caused havoc and made careers out of incitement, but their time is over.

Kenya will not go back to the politics of ethnicity, division, hate, and matters that are of conflict.

The DP added that any leader worthy of leadership should not incite voters to fight against one another.

Ruto said that the hustler nation believes that politics is not about conflict but bringing people together to move our society forward.

Nakuru is one of the areas in the country that was heavily affected during the 2017-18 Post Election Violence.

They said their competitors had resorted to inciting residents of Rift Valley, in the hope that they will turn them against Ruto.

Speaking in Njoro, the leaders expressed confidence that the region will remain peaceful, saying they were only interested in politics of unity and development.

Ngunjiri urged politicians not to play the tribal card when campaigning saying the move isolates other communities in the region.

"We do not want anyone to incite us into violence. We want to live peacefully with every community in the region," Ngunjiri said.

Kihaka urged Nakuru residents to stick to the peace agreement that was reached after President Uhuru Kenyatta and Ruto came together to end tribal politics.

Ichung'wa said it was unbelievable that civil servants in the office of the President and the Ministry of Interior were the ones colluding with local politicians to incite residents against each other.

He said it was annoying to learn that the Ministry of Interior has deliberately denied Njoro constituency police officers and police cars to ensure insecurity prevails in the area.

"They are inciting communities living in Rift Valley to poison them against Ruto," said Ichung'wa.