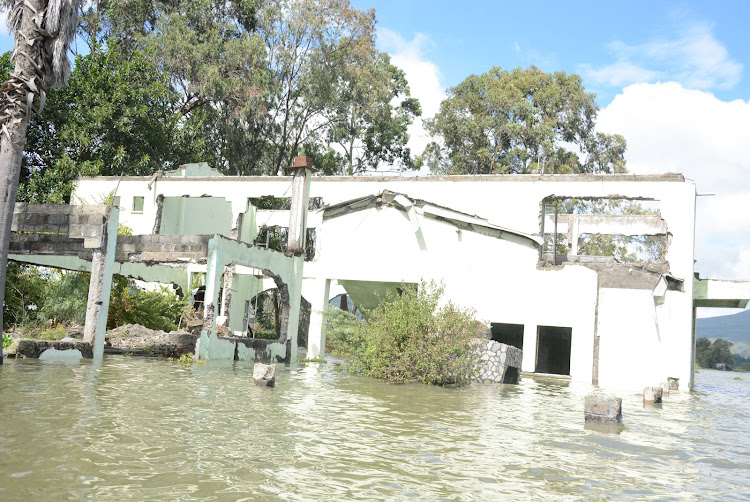 LAND GRABBING: A flooded structure that was constructed in riparian land around Lake Naivasha before water levels rose forcing the owners to relocate.
Image: GEORGE MURAGE

The genuine government documents of Lake Naivasha have disappeared mysteriously, a report by the National Land Commission says.

Riparian land along Lake Naivasha has been encroached on and ownership documents altered in an apparent attempt to grab it.

There are ownership disputes, with claims of irregular allocation of the plots and altering of the ownership documents.

Titles for various parcels of riparian land along the lake have changed hands and survey maps changed.

State officials charged with securing the sanctity of the titles have been accused of looking the other away, putting the entire fragile lake ecosystem in danger.

An investigation by NLC in conjunction with the EACC has laid bare the controversy of land ownership along the crucial water resource.

The disappearance of the official documents provided an opportunity for encroachment.

The Lands Act of 2012 defines a riparian reserve as land adjacent to the ocean, lake, sea, river, dams and water courses provided under the Survey Act Cap 299.

The law prohibits individual ownership of such reserves but one can be allowed to be its custodian, caring for them and ensuring their conservation.

The probe shows the original survey maps had ‘disappeared’ from government survey and mapping archives and replaced with illegal ones between 1994 and 1998. The titles were allocated based on these illegal surveys.

The NLC report acknowledges that riparian lands along the lake have been encroached into by strangers claiming to be owners.

“There is illegal allocation of the lands falling within the environmentally fragile areas and many human settlements with permanent structures within the riparian lands,” the report reads in part.

The suspected grabbers are said to collude with land officials to help them generate survey maps and data of the various plots and back date them before having the 'new' data captured to create validity of the generated titles.

With time, the 'new owners' emerge with documents laying illicit claims over the land.

The NLC report emerged from a probe into a case in which a long time resident on one of the prime lands complained that his parcel had been trespassed on by a suspected grabber.

The complainant says in a statement obtained by the Star that the alleged trespasser cut through his two parcels of land. He immediately begun developing the land that borders the lake, despite his ownership being questionable.

On this case, NLC established that the authenticity of the ownership documents had inconsistencies and courted doubts.

NLC says that part of the problem along Lake Naivasha is that it is not a protected area, exposing it to uncontrolled fishing and usage of the land around it, endangering even the aquatic life.

"The fact that Lake Naivasha is not a protected area makes it vulnerable to encroachment due to lack of clear government structures and systems."

The commission's regional commissioner Reginald Okumu had said the agency will set up demarcations along the boundaries of the water body, targeting land that is 1892.8 meters above sea level.

"The rising case of encroachment on the critical water body is worrying. Even more surprising is how the investors get the title deeds for the land under unclear circumstances," Okumu said.

He said a multi-agency team will be set up by the state to address the issues, he said, without specifying when.