West Pokot presents list of demands to Raila during tour

• Lonyang’apuo said that all the local primaries in rural and remote areas should be converted into low-cost boarding primary schools.

• He also said the delocalisation policy should be abolished. 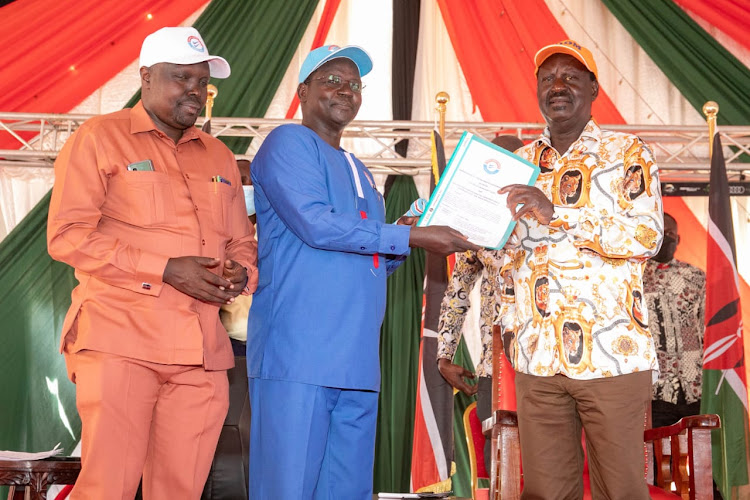 Raila drummed up support for his Azimio La Umoja agenda.

He was accompanied by Governor John Lonyang’apuo, Leader of the Majority in the Senate Samuel Poghisio, Pokot South MP David Pkosing among others.

During the rally that took place at Makutano, the residents handed over a Memorandum of the People, which was presented to him by the governor on behalf of the Pokot community from West Pokot and Tiaty.

The document outlines the community's areas of priority that have been neglected since independence.

The governor expressed confidence Raila could scoop over 300,000 votes from the county.

One of the requests made was the creation of the Pokot Community Code, which will be majorly used to identify the community.

“Pokot community to have her own identification code and should not be named as Kalenjin.”

The governor said that they have been left to fight on their own, and are only given the leftovers.

The community also wants compensation for historical injustices, saying that they lost their land.

The governor also said that the community wants the elevation of the Kisii University satellite in the county to be awarded its charter and be called the Kapenguria University of Science and Technology.

Lonyang’apuo said that all the local primaries in rural and remote areas within the county should be converted into low-cost boarding primary schools.

He also said the delocalisation policy should be abolished, adding that the policy has not been successful to the community.

Other requests include the improvement of road networks within the county at its neighbouring counties, as well as the construction of mega-dams along the rivers.

They also want the construction of a multi-billion Kapenguria Six Complex National Stadium, which will also serve as a memorial site of heroes who fought for independence.

They have also proposed to him to construct Kapenguria Six Heroes Memorial hospital in honour of the Pokot community who hosted the heroes during the struggle for independence.

They also want to be part of Raila's government if he wins the 2022 election by appointing one CS from the county as well as at least three ambassadors, four PSs, and CASs.