•The Draft 2022 BPS is set for review by National Assembly Budget Committee before approval by MPs in a plenary.

•Next year's budget is set to increase by over Sh300 billion, setting the stage for higher taxation. 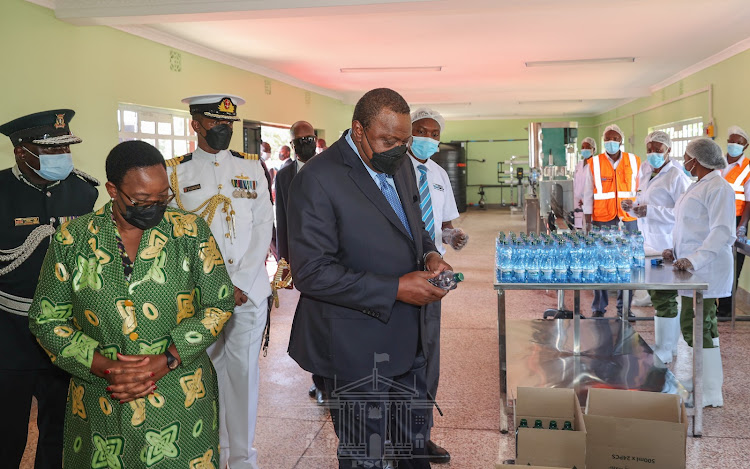 President Uhuru Kenyatta when he inaugurated the institution's 10,000 litre per day capacity water bottling plant and commissioned the construction of the Kenya Prisons Service Referral Hospital on October 29.
Image: PSCU

President Uhuru Kenyatta’s successor could be faced with pressure to fund the Sh3.3 trillion budget proposed by National Treasury in the Jubilee administration’s final lap.

The proposals by the Treasury show that state spending will increase by over Sh300 billion compared to the current financial year.

The current administration will have barely two months to implement the budget, meaning the next team will be left with the task of meeting the projected shortfall.

The 2022 Draft Budget Policy Statement also reveals that the debt stock would rise to Sh9.4 trillion, above the Sh9 trillion ceiling set by MPs in October 2019.

Treasury projects that the debt stock will be at Sh8.6 trillion at the end of this financial year.

This means the next administration will have no more room to borrow to fund the Sh862.7 billion deficit.

Treasury has projected that Sh363 billion will be sourced from foreign lenders and Sh483 billion domestically, a move that will only be possible if MPs adjust the debt ceiling.

At the time they will take over the government, the recurrent expenditure is projected to increase by Sh71 billion while interest payments would be up by Sh117 billion.

The interest payments – both external and domestic debts - are set to increase to Sh687 billion from the current Sh560 billion, a difference of Sh82 billion.

The new team, the Draft BPS shows, will also have to raise an additional Sh13 billion to meet pension expenses, currently at Sh137 billion.

It was projected in the current budget that the President and MPs are likely to get Sh918 million send-off perks, inclusive of gratuity payments to the DP and two Parliament speakers.

Treasury has also projected an increase in wages and salaries expenditure to Sh560 billion from the current Sh526.1 billion.

It would also be interesting to note if the incoming administration would stick to the policies and measures taken by the current team to cut state spending.

National Treasury CS Ukur Yatani in the draft BPS says the government will continue to restrict growth in recurrent spending and double its effort in domestic resource mobilization.

The government has also been cutting down on non-priority expenditures such as hospitality, training, travel and freezing of employment in non-priority sectors to manage the public wage bill.

“The increased public expenditure pressures, particularly wage and other recurrent expenditures would put a strain on the fiscal space,” Yatani said.

In the next financial year, revenue collection is projected to increase to Sh2.4 trillion from the Sh2.0 trillion that was projected for the current year.

“Revenue performance will be underpinned by the ongoing reforms in tax policy and revenue administration,” Yatani said.

The CS warned that the emergence of new Covid-19 variants posed threats to the budget framework in the event of renewed disruptions to trade and tourism.

Treasury warns that there were more risks relating to lower agricultural output due to potential adverse weather conditions and continued desert locust infestation in the northern region.

Away from the overall fiscal framework, the budgets for ministries, state departments and agencies are set to increase by Sh136 billion from the current year.

The Education budget, which is poised to take a chunk of money President Kenyatta seeks to allocate to the incoming administration, is set to increase by Sh24 billion.

TSC is set to get Sh15 billion more compared with its current allocation ostensibly for recruitment of more teachers and adjustment of salaries.

President Kenyatta’s administration has also hinted it would be keen on the completion of the energy and roads projects it has initiated so far with the sector budget increased by Sh33 billion.

The Defence ministry is also poised to consume a sizeable chunk of the Sh3.3 trillion budget at Sh157 billion followed by Interior’s Sh143 billion – an increase of Sh31 billion.

The health budget is set to increase by Sh5 billion to Sh126 billion while allocations to the environment sector are poised for an increment of Sh10.2 billion.

The 2022 BPS has also capped Parliament’s budget at Sh38.4 billion – up by Sh1 billion, while the Judiciary would be allocated up to Sh18.3 billion.

IEBC, which has been pushing for close to Sh40 billion, has its budget provisions capped at Sh21.6 billion.

Public administration costs are set to increase by Sh14 billion, the same amount being the case for governance and justice sectors.