Says on the day of abduction he was very busy doing other work and was nowhere near Mavoko law courts.

• Leliman further denied having played a part in any scheme to kill Kimani, Mwenda and Muiruri.

• He said apart from Mwenda whom he arrested for committing a crime, he never knew the two other men. 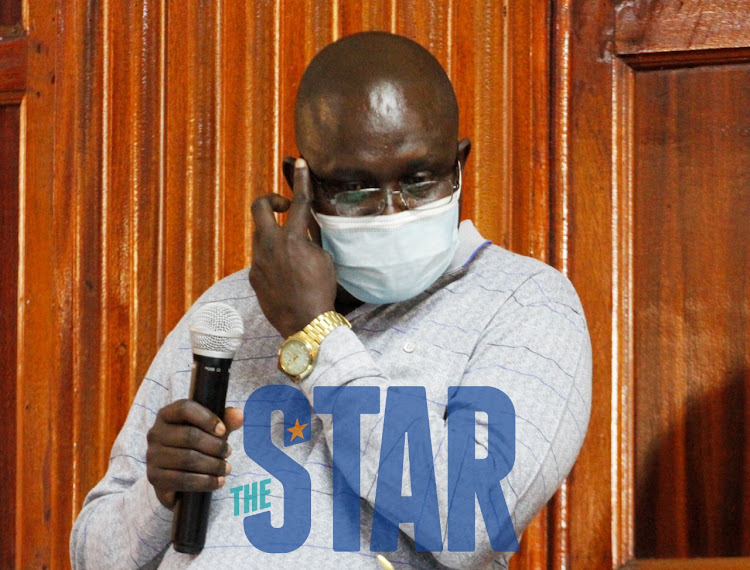 Administration Police Officer Fredrick Leliman who is the first accused person in the murder trial of lawyer Willy Kimani, his client and a taxi driver. Him alongside four others were put on defense by Lady Justice Jessie Lessit after the court found them to have a case to answer.
Image: ENOS TECHE

Fredrick Leliman, the AP officer whom the prosecution claim masterminded the chilling murder of lawyer Willie Kimani, on Monday explained in detail how he shot and injured Josephat Mwenda.

Leliman told Justice Jessie Lessit that he is a sharpshooter, "I aimed at him [Mwenda] while standing about 11 metres from him."

He said he shot and injured Mwenda on April 10, 2015. Leliman, who then headed Mlolongo Spiv team, said he was in the company of other officers, among them former OCS Wambugu, when the incident occurred.

He said they had gone to patrol the area following a complaint from village elders about suspicious people who were gambling and stealing from members of the public.

When they arrived, he said, they split into groups. The suspicious people, he claimed, all scattered, leaving a motorbike behind.

"One of them came back to take the motorbike and PC Jane Ngige rushed to get it, but the man removed a knife. I heard Ngige screaming for help," Leliman said.

At that point, Leliman claimed that he asked the man to surrender, but he refused and "I aimed at his hand, shot him and he fell down."

While being led through his statement by lawyer Cliff Ombeta, the former Mlolongo officer said he charged Mwenda with resisting arrest and being found with bhang, which he said was found strapped to the motorbike.

Leliman admitted to being in the company of the OCS when Mwenda was arrested for a second time, eight months later. He denied that he went to Mwenda's house and kidnapped him before charging him in court with a traffic offence.

"It is a lie. We did not kidnap him from his house. He was arrested by the OCS at Mulei Supermarket," Leliman said.

That day, he said, they caught Mwenda carrying three passengers. He said they stopped their car when they saw four people on a motorbike.

"I did not even know it was Mwenda. When we parked the car, I opened the door and sat there. It was the OCS who went to arrest Mwenda," Leliman said.

Speaking about the events on June 23, 2016, the day the three men were killed, Leliman said he was very busy doing other work and was nowhere near Mavoko law courts.

He said he was meeting his sister-in-law at Cabanas at the time the prosecution claims he was at the place where the three were abducted.

Leliman said he did not have a police radio that the prosecution has claimed he used on June 23, 2016.

"I was at home and I was not at Thika Super Highway on June 23 and 24, according to this data,” he said.

Leliman further denied having played a part in any scheme to kill Kimani, Mwenda and Muiruri. He said besides Mwenda, whom he arrested for committing a crime, he never knew the two other men.