County chief says Kisii will be safe in Raila's party, which, he adds, will form the next government. 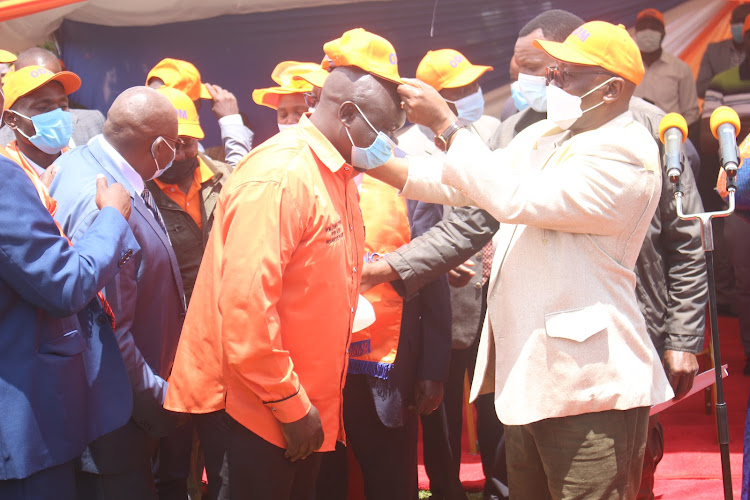 Kisii Governor James Ongwae yesterday told the Star that he will do whatever it takes to ensure that he is succeeded by an ODM county boss next year.

Ongwae, a close confidant of ODM leader Raila Odinga, said the county will be safe in the hands of the Orange party, which, he said, will form the next government.

“Kisii is one of the counties that have witnessed massive development during my tenure. My next business is to ensure an ODM successor as I leave office,” he said.

The county boss, who is seen as a key pillar of the ODM party in the Gusii region, has maintained studious silence as the campaigns for his successor intensify across the county.

Kitutu Chache South MP Richard Onyonka, who is said to be Arati’s main campaigner, alleged misappropriation of resources at the county.

The duo has been traversing the county, maintaining that they are best suited to inherit the county from Ongwae, warning residents against electing elderly leaders for the top job.

However, their political pact has not gelled with senior ODM bigwigs from the region, raising concerns on their party of choice as they plot to succeed Ongwae.

Their aggressive campaigns against the county’s senior politicians, including Ongwae, Senator Sam Ongeri and Transport CAS Chris Obure, have triggered a hit.

On Monday, Arati, who is eyeing the ODM ticket, said time was up for the "elderly" political figures from the county to continue "micromanaging" the destiny of the county.

“We have said it before and I will repeat it that time is up for the elders to quit politics. The people of Kisii county will decide their destiny without being coerced,” Arati said.

The Nairobi-based politician has shifted his political base to Kisii. He said that most of the projects initiated by the county government under Ongwae’s leadership stalled.

But the governor, who has strategically avoided responding to Arati despite constant attacks, said his record can speak for itself for the nine years he has been at the helm

Ongwae, who is the Gusii community’s senior-most political leader, avoids wading into any political controversies and has kept off county succession politics even as he nears the end of his term.

However, his declaration that he will go an extra mile to campaign for the person that will get the ODM ticket for governor next year could lift the lid off his political plans.

Woman Representative Janet Ong’era, who is eyeing the ODM ticket for governor, said the county has fared well under Ongwae’s leadership.