• Uhuru is expected to set out the ambitious actions Kenya is taking to tackle climate change and showcase Kenya as a leader in climate action in the region.

• Kenya was the first African country to pass a Climate Change Act in 2016 and runs on 90 per cent renewable power, with a target of hitting 100 per cent by 2030. 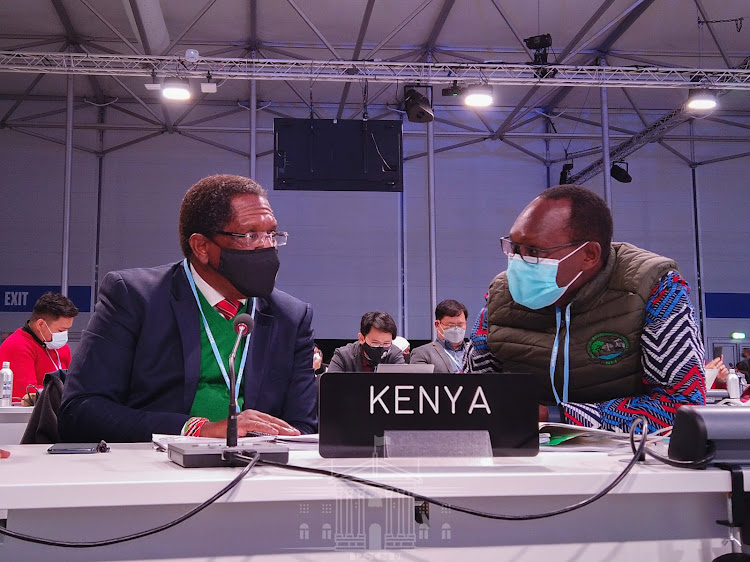 Kenya is seeking greater commitment from the rest of the world as the Climate Change Conference kicks off in Glasgow, United Kingdom.

President Uhuru Kenyatta will be the 9th speaker at the COP26 World Leaders Summit on Monday afternoon.

He is expected to set out the ambitious actions Kenya is taking to tackle climate change and showcase Kenya as a leader in climate action in the region.

Despite bearing almost none of the historic responsibility, Kenya is leading the way in tackling climate change in the region.

Kenya was the first African country to pass a Climate Change Act in 2016 and runs on 90 per cent renewable power, with a target of hitting 100 per cent by 2030.

"COP26 is a make or break for humanity and the planet. The time to take action is now. We hope that this conference will see pledges honoured to enable adaptation, especially on the African continent. COP26 must produce concrete results," Environment Cabinet Secretary Keriako Tobiko said.

Uhuru will also be joining other discussions including a high-level event on innovation hosted by UK Prime Minister Boris Johnson.

Marathon champion, Eliud Kipchoge will join the President in pressing for action to halt and reverse forest loss.

The President is also expected to speak at a High-Level Panel for a Sustainable Ocean Economy to be hosted by the Prime Minister of Norway and the President of Palau.

On Wednesday, in an event to be hosted by Diageo, Uhuru and Kenya Breweries Limited MD John Musunga are expected to meet the Scottish Africa Business Association for discussions on water and sustainability in an African context.

Diageo has been a business champion of Sustainable Development Goal 6: “Ensure availability and sustainable management of water and sanitation for all”.

Diageo will be joining a group of the world’s biggest companies and brands to launch a major awareness campaign, “The World’s To-Do List” during COP26.

On Wednesday, National Treasury CS Ukur Yatani will be speaking at Finance Day, where climate finance best practices will be highlighted.

Kenya has been an African pioneer in Green Bonds, with the UK supporting both the establishment of a regulatory framework and the launch of Kenya’s first Green Bond, which was dual-listed in Nairobi and London in January 2020 at the UK Africa Investment Summit.

There will also be a side event hosted by the World Wide Fund for Nature (WWF) on nature-based solutions where Kenya will be represented by Tobiko, Kipchoge and Environment PS Chris Kiptoo.

On Thursday, Energy CS Monica Juma will be speaking at Energy Day where leaders will discuss increasing their climate ambition and actions required to make clean energy accessible and affordable.