• Both Ruto and Raila are battling to control Kikuyu-dominated Mt Kenya, a region that will determine the next president. 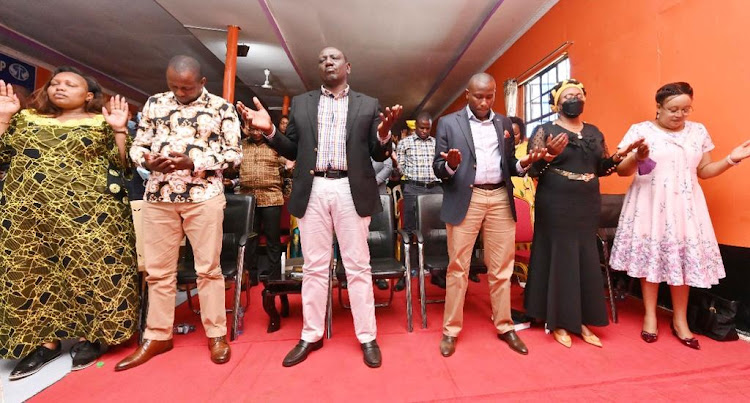 PRAISE BE: During a church service at the Latter Glory Worship Centre in Gachie, Kiambaa Constituency, Kiambu County on Sunday, October.
Image: COURTESY:

With the behind-the-scenes support of President Uhuru Kenyatta and government machinery, Raila has launched spirited campaigns to scale the vote-rich region.

The issue: Junet, a close Raila confident, remarked that if the former PM wins the general election, the government will be owned by the people of Nyanza.

He spoke at a funds drive on Friday last week, attended by Raila, Interior CS Fred Matiang’i and Health CS Mutahi Kagwe, among others

Junet, the Minority Whip in the National Assembly, said the Mt Kenya people have enjoyed wielding power for more than 20 years. If Raila assumes the presidency, it will be the turn of Nyanza residents to enjoy power.

"If Raila wins, the government will be owned by the people of Nyanza. I do not want this to be picked by the media because Mutahi Kagwe will be upset," he said.

"Although even you and your people have enjoyed power for more than 20 years. This time round the government is for Nyanza locals. Mutahi, you will soon come back here as a visitor" Junet said.

Ndindi Nyoro said Junet is 'the most honest person in ODM' who airs out what is discussed in secret.
News
9 months ago

Both Ruto and Raila are trying to control Mt Kenya, with an estimated six million votes. It will determine the next president if it votes as a bloc.

Uhuru prefers his handshake partner Raila to succeed him and their troops are trying to dislodge Ruto who enjoys significant support. It is being diminished by Raila's forays blessed by Uhuru and the region's tycoons.

However, ODM secretary general Edwin Sifuna has stated that Junet made the remarks "jokingly" and said they do not portray Raila's non-ethnic thinking.

On Sunday, the DP's lieutenants took on Junet, Raila's right-hand man. They said his remarks that Mt Kenya people will be treated as guests and sidelined in an ODM government were a true reflection of what the former Prime Minister is planning.

The pro-Ruto MP, who had accompanied the DP for a church service at the Latter Glory Worship Centre at Gachie in Kiambaa, Kiambu county, expressed fears Junet’s remarks were not good for the Akiguyu community.

He and others cautioned supporters against electing an ODM government, saying they will be disadvantaged.

Naivasha Town MP Jayne Kihara said Junet's remarks were unfortunate, adding that the days when the politics of division would sell in Kenya are gone.

Echoing the sentiments, Murang’a Senator Irungu Kang’ata said Junet’s spoke from his heart and said what the ODM leader Raila stands for.

“That side has always thrived on hate, division and violence since 2007," Kanga'ata said.

Kiharu MP Ndindi Nyoro praised the Suna East legislator for being “honest and speaking out what they discuss in secrecy”.

Ugly words from the heart

Murang’a Senator Irungu Kang’ata said Junet spoke from his heart, said what ODM really stands for. "That side has always thrived on hate, division and violence since 2007.''

He said Mt Kenya was behind the hustler movement because of the formation’s dedication to expanding enterprises.

"We do not believe in the politics of thuggery that Odinga is known for. The only fight we know is the fight to uplift livelihoods of ordinary Kenyans," Nyoro said.

Mugirango South MP Silvanus Osoro said the sentiments by Junet did not represent the wishes of the people of Nyanza.

The leaders scolded Junet, even as the DP questioned why the ruling Jubilee Party decided to endorse Raila for president at the expense of members who campaigned and voted for Uhuru in 2013 and twice in 2017.

In what appeared aimed at President Kenyatta, the DP said it was unwise to destroy Jubilee and embrace Raila.

“Surely, you mean we the people of slogans such as ‘Wembe ni ule ule’, ‘Kumira Kumira‘ and ‘Tano Tena’ had no plans to go and hire a presidential candidate," he said.

Those people should stop playing and mocking us,” he told a rally at Gachie market, taunting them about the consequences for supporting Raila.

The DP asked Kenyans to rally behind a people-centered political formation. He said as the 2022 general election draws Kenyans must choose between leaders with the people’s agenda at heart and those promoting their own interests.

He said for a long time, the country had lagged behind in development because of wrong choices made on the ballot.

“But it is now clear. This is a race that pits those with weak empowerment of ordinary people against those who want power for themselves, he said."

Ruto said it is only through the revolutionary bottom-up economic development model that Kenya will be transformed.

He said the plan will invest at the base of the wealth pyramid, initiating broad programmes that will stimulate innovation and growth of enterprises.

“It is a huge departure from the current but failed approach of the trickle-down economy that is driven by the handout mentality,” he explained.

Ruto cited Njuguna Wanjiku’s victory in the recent Kiambaa by-election as a signal that people’s power was supreme.