Fire fighters from various government units including the KDF were on the ground battling to bring the blaze under control.

•The traders lamented that "some people" are playing gams with their source of livelihood with the fire cases. 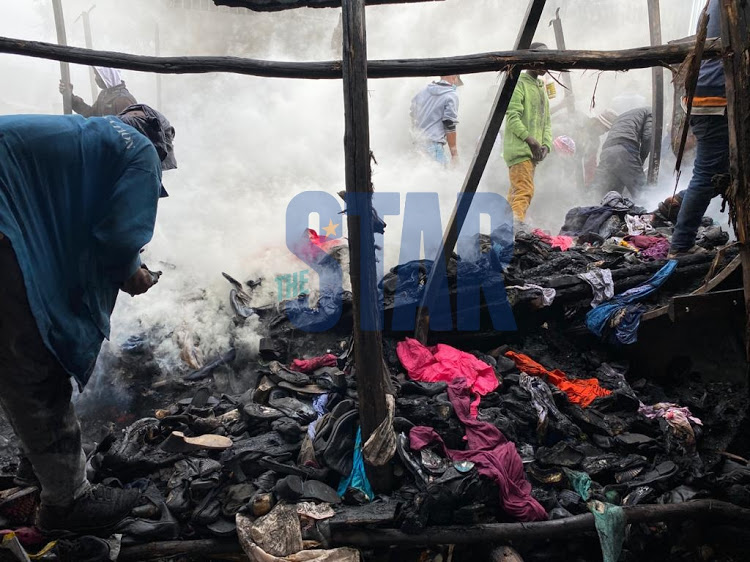 Gikomba traders salvaging what is left after a past morning inferno.
Image: MAUREEN KINYANJUI

Once again, traders at Gikomba Market are in tears after goods of unknown value were destroyed in a mysterious fire.

Despite the rains on Tuesday night, the fire spread in the market section adjacent to Muthurwa primary school and opposite Jua Kali.

According to Kamukunji Mp Yusuf Hassan, the fire fighters from various government units including the KDF were deployed to bring the blaze under control.

With sad faces written all over their faces, some traders said the frequent fires were a nightmare for them especially with the hard economic times.

"We just sent our children to school last week and trying to look for more money for school fees. Now we have been taken ten steps backwards by this fire...Is it really fair?" John Situma, trader said.

"I received my new bale of clothes on Monday, I haven’t even sold much yet everything was destroyed in the fire," Boniface Mwangi, also a trader lamented.

Mysterious fires in the market have become a norm and no one has ever been arrested.

In 2018, the market experienced three fire cases, which led to President Uhuru Kenyatta calling for investigations.

In June that year, 15 people died and at least 60 were injured when a section of the market dealing with timber and clothes was burnt.

Kamukunji MP Yusuf Hassan claimed the fire had been planned to evict some traders.

Interior PS Karanja Kibicho said several people in the market appeared to have known of the arson in advance.

Despite the investigations, no report was released.

Last year in February fire broke out in the mitumba section.

This year, several minor fire incidences have been reported, with the last one being on August 6, 2021.

The traders went ahead and sued the county government over frequent fires and demanded Sh1.2 billion in compensation.

The suit filed by 918 traders listed the challenges they face as a result of frequent fires at the market.

The traders listed 15 fire incidences since 2015 saying the frequent occurrences shows that the county government has failed to take any or adequate precautions for their safety.

City Hall was accused of breach of duty and negation of the obligation by failing to put in place a suitable business continuity plan to sustain the business environment at Gikomba Market, affecting the performance of the overall economy.

The traders said the fires occur despite their remission of levies, rates, license fees among other charges collected by the government.