• Boniface Kimutai, who met them at the church, said she was jovial.

• Agnes was living at a nearby training camp, while the husband lived in their house about four kilometres away. 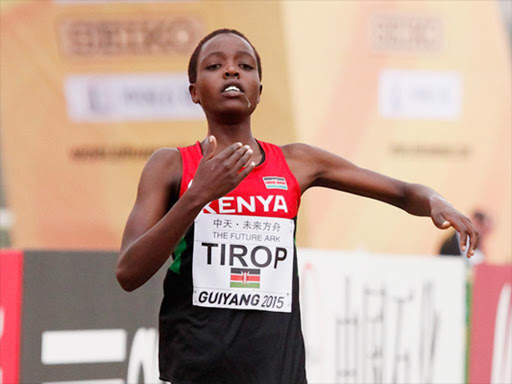 She told her friends about how she was planning to build her athletics career.

Boniface Kimutai, who met them at the church, said she was jovial.

But a few days later, her body was found in her bedroom with a stab wound to the neck. She was found dead in her home on Rural Estate near Iten town on Wednesday.

Agnes was living at a nearby training camp, while the husband lived in their house about four kilometres away.

She was the 2015 World Cross Country Champion and had also participated in the August Tokyo Olympics where she finished fourth in the 5,000-metre race.

The athlete and her husband are said to have differed after she returned from the Tokyo Olympic Games and later travelled to Germany for another race. On return from Germany, Agnes went straight to the camp and not her home.

“She expressed fears over differences in her family and said she felt comfortable at the camp and not at the house,” an athlete who identified himself as Benson said.

Benson said at the camp, Agnes went on well with her training routine and on Sunday evening she was with her colleagues.

However, he said she was talking on the phone frequently on the same evening.

On Monday, she woke up very early for her usual training and returned for breakfast at about 9am.

At around midday, she was picked up by a friend from the camp and driven home.

Agnes and the friend found the husband in the house. The friend was working to reconcile the two over some 'disturbing' issues in their relationship.

The friend left their home on that Monday and returned on Tuesday to check on them but could not gain entry into the home as no one responded to open the gate.

Police are now investigating a possible love triangle that could have led to the killing of Agnes.

Some athletes said the family problems she was going through had taken a toll on her and at times she looked disturbed.

Colleagues said she did not have any social media accounts because of restrictions from her family.

“I asked her one time why she disliked social media and she told me she did not want to land herself into trouble,” her cousin said.

The cousin said Agnes appeared disturbed, especially after the Tokyo games and she talked to her relatives about her marital problems.

“Agnes was always happy but many times it appears she was hiding some frustrations within her,” neighbour Jane Kering said.

She said they rarely visited the house Agnes lived in with her husband. The couple did not have children. They had been married for about three years.

Her husband went missing after he allegedly called her parents crying and seeking forgiveness for 'an incident' he said he had committed.

Keiyo North police boss Tom Makori said they were still searching for the missing man because initial investigations indicated that he was either the prime suspect or knew details leading to the death.

Makori said interviews with family members indicated that the athlete and her husband had been having marital problems which were being resolved. The marital problems had not been reported to the police.

“Because the husband is missing and because of the call he made to her parents we are treating him as a prime suspect in this matter,” he said.

CCTV cameras and other items were collected from the home to be analysed as homicide detectives seek to unravel what happened.