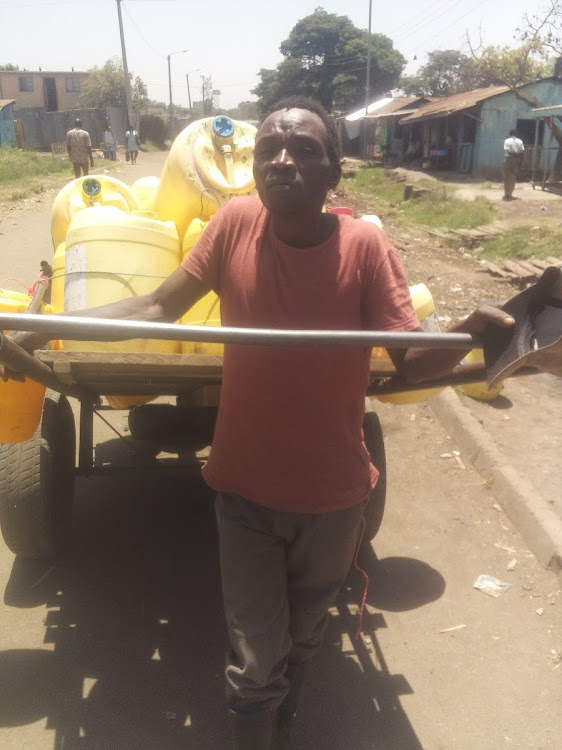 With the numerous containment measures after Covid-19 outbreak, life was already hard enough for a majority of Kenyans.

However, the sudden sharp rise in fuel costs is projected to increase the cost of production of many basic commodities, making life impossible for the average Kenyan, especially those in urban areas.

Mutua, a water vendor on Nairobi’s Matiang’i estate, stares blankly into space, holding a tin of githeri in the right hand and a pack of 200ml milk in the left.

Four hours after he started hawking water on the estate at 6am, he was only Sh60 richer after selling three cans of water because his stomach quickly claimed a share of the earnings.

“Githeri costs Sh30, the quantity has reduced remarkably as, previously, the amount would get me enough for two meals. The packet of milk was Sh20, now it's Sh25. Other shops sell it at Sh30,” he said.

Mutua lives alone in Nairobi after he sent his wife and children to their village in Machakos. He lost his job as a chef at a restaurant in town last year when Covid-19 hit the country, prompting him to start vending water for a living.

Mutua uses kerosene to cook and has been considering buying cooking gas, but the recent spike in fuel prices has seen him drop the idea.

“If I’m barely able to afford kerosene, what with gas?” he posed.

Previously, Mutua would spend Sh50 on kerosene and use it for three meals, but the prices have shot so high that the same amount only affords him kerosene, just enough to cook a single meal.

“The githeri is precooked so I only need to fry it, but the kerosene will still not be enough for three meals,” he said.

The script is the same for Victoria Wahu, who says she is struggling financially following the sudden increase in the price of products after the new fuel prices.

“After the prices were announced,  I went to buy cooking oil the next morning and the cost had already been increased by almost Sh100,” she said.

Wahu, a secondhand clothes vendor in Gikomba, said she had taken a break to reorganise her finances after running losses, remaining with dead stock and eating into her savings to sustain the business.

However, upon resuming business, Wahu says the cost of bales had increased significantly, yet the demand was getting lower.

“A bale that would previously cost me Sh7,500 now costs Sh11, 900. The clients get fewer by the day as people prioritise basic items because of the tough economic times,” she said.

“From April 2020, things have only gotten worse, yet the cost of living is just increasing. It is getting too difficult to cope.”

Paul Wendo, a shop owner in Mathare, said shopkeepers adjusted their prices instantly because they had been operating on minimum profits since the Covid-19 outbreak.

“The cost of most food and household items have been gradually increasing, but retailers are the hardest hit,” he said, we only put minimum margins."

Mildred Musungu, who runs a shop near Korogocho, shared her expenditure records that showed an almost double increase in the cost of some items like cooking oil.

A 500ml pack of milk has been retailing for Sh50 as most shopkeepers made a Sh5 profit. Today, however, most brands retail at Sh55.

“I brought two boxes of different milk brands; one common one which was being sold for Sh50 meaning that to make some profit, I had to sell at Sh55. After four days, I had not sold anything, so I took it back to the wholesaler,” Musungu said.

She said they had also been forced to reduce the number of items they stock as they risk going stale for lack of buyers.

“There was a time bread prices went up and we were selling at Sh55. No one bought. People only buy the very basic items,” Wendo said.

A box of 1kg Jamaa soap, which was Sh800, now sells at Sh1,300, but the shopkeepers said the item still moves because it is a necessity for many.

“This high cost of fuel is impacting negatively on our business. Customers won’t buy, they believe it is the shopkeeper who is increasing the prices,” Wendo said.

“We are not opposed to the increase in the cost of items, but it needs to be gradual. Many people were badly hit by the Covid-19 containment measures,” he added.

Kenya increased the cost of petrol to the highest in a decade after authorities decided not to tap a fund meant to keep prices stable as the local currency weakened.

The price jumped by six per cent to Sh134.72 per litre in Nairobi, three weeks ago after the Energy and Petroleum Regulatory Authority announced in a statement.