•He was the advocate for former police boss Hussein Ali in crimes-against-humanity case at The Hague. He the joined President Kenyatta's defence.

• He was  a classy dresser, with a love for the finer things in life. He once asked a Probox driver how he had the audacity to drive to Karen. 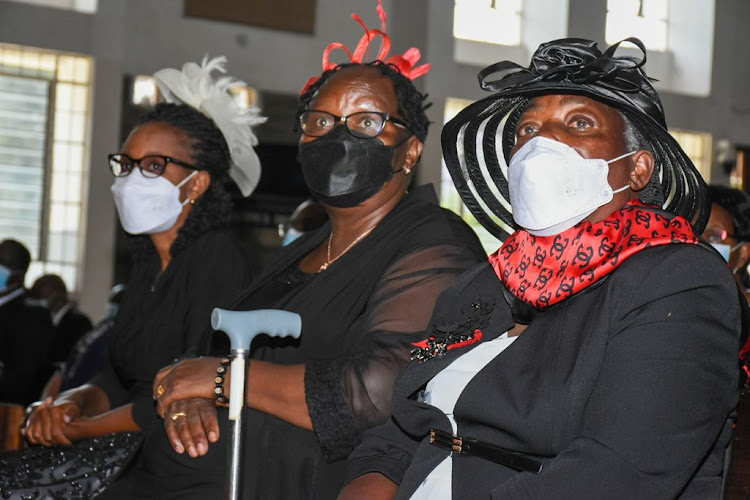 Lawyer Evans Monari passed among his friends with the title ‘Doctor’, though he did not hold a PhD.

Whenever he was challenged about the title, he'd quip that once his friend Githu Muigai became a professor, he picked up his former 'Dr' title.

Monari and the former attorney general met in law school and remained closed friends ever since.

Monari, a lawyer of long-standing, died on October 4 after what the family called a long illness. He was 58.

He is survived by his widow Jacqueline Okindo Monari and four children: Cynthia, Michell, Joshua and Jeremy.

Muigai told the funeral service that Monari was a confessed admirer of him and that once he got a professorship, Monari remained adamant he would take his former title.

“Monari would tell people that ‘once Githu became professor, what was his former title of doctor going to be used for'? So he picked it from the floor and started using it,” the former AG said, to laughter from the otherwise subdued congregation.

As friends recounted his life and social relations, what stood out was Monari’s fun-loving persona and his elitist tastes. He did not shy away from his taste for the finner things in life and letting everyone know about them.

For example, comedian Walter Nyambane recounted that at one time, the lawyer was caught up in an accident in Nairobi’s traffic. His car had hit a Probox.

“When the driver of Probox complained that ‘you’ve hit my car,’ Monari asked him, ‘Which car?’ When the driver pointed his car, Monari said, "There's no car there'."

“He then asked him where he was going and the driver said Karen. Monari wondered how a Probox driver would have the audacity to drive to Karen.”

When the fun-loving Monari turned 50 in 2013, a senior judge who did not want to be named told the Star, he required his friends who attended his party to dress in their former high school uniforms.

“So we all attended dressed in our high school uniforms, looking funny, childish but lovely. I went to Alliance, so imagine me in the uniform. That was a great man,” he said.

Monari would buy 50-year-old whisky for parties to entertain his friends.

He also bought a 50-year-old vintage car and whenever he drove it to the judge's home, the jurist's young children would say, "Daddy, Uncle Monari has come sitting in a big shoe."

“The guy had fine taste in suits, watches, cars and even musical instruments,” the judge said.

His suits were only to be dry cleaned at top hotels.

For example, in 2014, Monari took to social media complaining that the laundry at one Nairobi hotel "keeps stealing my suites, Please style up. He later thanked the hotel for tracing his suits.

Monari's talkative nature also made him a natural choice for master of ceremonies for any event in his circle.

Nyamira Senator Okong'o Omogeni said that while he served alongside Monari on the LSK Council between 2007 and 2010, Monari was a quick fixer of problems and an easy entertainer.

"Whenever we had a long trip, he would entertain us, say, from Nairobi to Western."

He was the advocate for former police boss Hussein Ali in his crimes-against-humanity case at The Hague. After Ali's case collapsed, he joined President Uhuru Kenyatta's defence team.

The burial will be held on Sunday at Gesima, Nyakongo village in Nyamira county.