• Wamalwa handed over the State Department of ASALs Development and Special programs on Thursday. 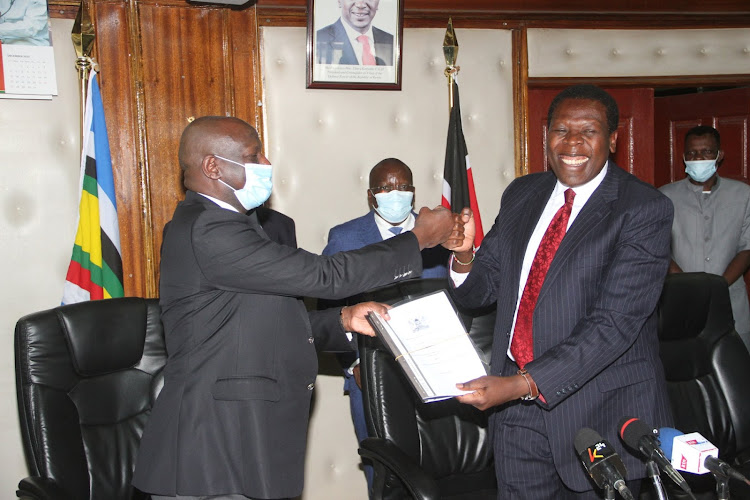 Wamalwa handed over the State Department of ASALs Development and Special programs on Thursday following the recent reshuffle of the Cabinet by President Uhuru Kenyatta.

During the ceremony, Wamalwa thanked the Devolution Development partners whom he said have greatly been part of the continuous transformative journey towards strengthening devolution.

“I wish to thank the Ministry of Devolution family /colleagues whom we worked with in driving the Devolution agenda forward, the Council of Governors that we worked with to build Intergovernmental Relations to an all-time best in serving same Kenyans in one indivisible Nation called Kenya,” Wamalwa said.

Keter said that his team will strive to improve and continue with the good work of his predecessors guided by the mandate of providing policy direction and leadership for effective management of devolution.

"The intention of Devolution is to bring services closer to the people and create a platform from which communities could participate in decisions that affect their economic and political well-being."

In Uhuru’s changes that were announced last month, CS Monica Juma was moved from Defence to Energy; Keter from Energy to Devolution, and Wamalwa from Devolution to Defence.

Four PSs were also reassigned to improve service delivery to the citizens as the president’s term approaches the end.

State Department for Public Works PS Gordon O. Kihalangwa was moved to Energy and replaced with Solomon Kitungu from the Transport Department.

The powerful docket of social protection, pensions, and senior citizens were moved from the Ministry of Labour and will now be domiciled at the public service ministry.