• Committee differs with IEBC on the projected number of new voters 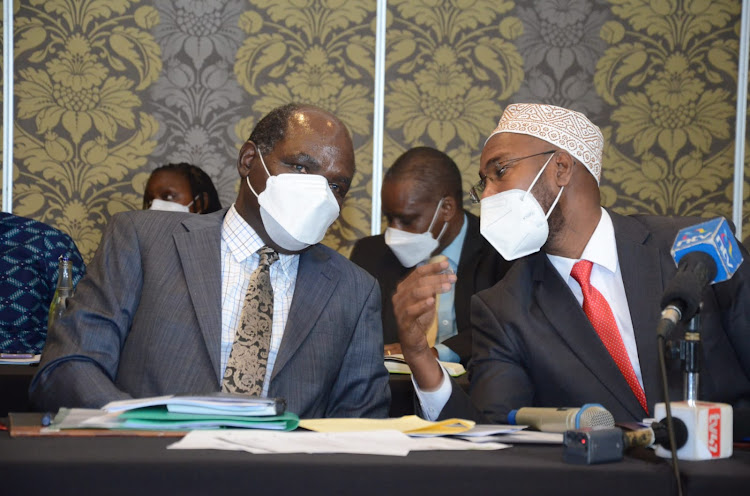 MPs have put the IEBC to task over what they insist is skewed distribution of biometric voter registration kits in the ongoing mass listing for the 2022 General Election.

Members of the Justice and Legal Affairs Committee said the criterion of three kits per ward has disenfranchised regions with vast administrative units.

Also of concern is that the kits, save for those at the 52 Huduma Centres and public universities, are restricted to one ward amid reports of breakdowns.

The committee also expressed discomfort with the way the electoral commission distributed the 27,241 registration centres.

This was even as the commission top brass who appeared before the JLAC ruled out extending the 30-day mass voter registration that lapses on November 4.

“We have no opportunity for a second voter registration. Budget is slashed by half and stretching for 30 days. We don’t foresee a second opportunity unless budget is availed,” commissioner Abdi Guliye said.

But JLAC held that the budget was grounded on a “falsehood”, further casting doubt on the IEBC’s projections to list new six million voters.

The committee chaired by Kangema MP Muturi Kigano queried how the IEBC arrived at the said figure, saying only 4.5 million new IDs have been issued by the national registration bureau since 2017.

Of these IDs, some 1.6 million are yet to be collected.

At the same time, MPs and the commission traded blame over unprocessed bills, which the IEBC says would improve their management of the 2022 polls.

The legislators also termed illegal the requirement for a letter from the area chief for IEBC to okay a voter transfer.

“The chiefs’ letter is unlawful. How do you intend to stop mass voter transfer instigated by politicians in a way consistent with the law?” Olago Aluoch asked.

“The wards are not equal in size. When we insist on three for each, others end up disenfranchised. Whereas some are urbanised, there are serious issues of travel in the rural areas,” Kaluma said.

The committee members sought that the kits be opened up for eligible Kenyans to register at their comfort from any location to improve the turnout.

On the projected new voters, MPs demanded explanations on how the numbers were settled upon arguing that the figures were not grounded properly.

“We want the IEBC to explain exactly how the projections came to be both mathematically, statistically, and in terms of good governance,” Kajwang’ said.

The lawmakers said the numbers are a driver on costs, define distribution of election budget, and is also a political issue.

They questioned why IEBC was employing ‘imaginary figures’ when actual figures can be obtained from the national registration bureau.

MPs argued the issue of targeted numbers is what has been used to allocate registration centres and polling stations.

“We want to see how equitably you have distributed the kits across the country. We need to know who is standing in the way of the rights of Kenyans to be registered,” Kajwang’ said.

“Of the projected number of people who got IDs, how many of these IDs are uncollected? We are concerned because resources are allocated based on the projections,” Oluoch said.

IEBC acting CEO Hussein Marjan told the committee that the commission looked at three scenarios and triangulated the same to arrive at the six million figure.

He said the commission further mapped the age groups and calculated the total for each category, the same resulting to nearly the same figure of about 26 million.

“Using the growth rate of 36 per cent and triangulation, we get the same figures. KNBS said 4.5 million new IDs had been issued but let us not forget there were people who were there and have no IDs,” Marjan said.

However, Wangwe said the six million, which IEBC said was based on the 2017 poll data, did not factor any movement on the current population.

Kaluma said once the numbers issue was sorted, it would go a long way to resolve and reorganise the emerging issues in the ongoing voter listing.

“There is a possibility that Homa Bay did not get a registration centre because of these numbers. We cannot base it on speculation since the demographics are different,” Kaluma said.

On the requirement for a chief’s letter, Chebukati said it was the only way a returning officer can ascertain that a voter seeking transfer has stayed in an electoral area for six months.

Chebukati said general voter apathy was also a cause of concern.
News
1 week ago

Chebukati told MPs that the listing can be done at any of the 52 Huduma Centres across the country.
News
1 week ago