The species in the country has affected about 2 million hectares of land.

• The government now wants to manage the species through a new Swiss-Kenyan Woody Weeds + project that was launched at the Kenya Forest Research Institute headquarters.

• The initiative is being financed by the Swiss Agency for Development and Cooperation. 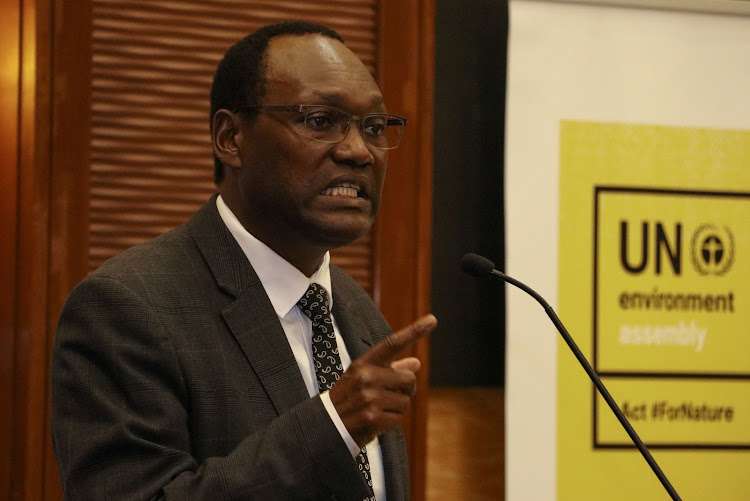 Environment and Forestry PS Chris Kiptoo during a press briefing on the fifth session of the United Nations Environment Assembly in Nairobi on Tuesday, February 16, 2021 Image: WILFRED NYANGARESI

The Ministry of Environment on Tuesday launched a new project that is aimed at sustainable management of the invasive weed.

The Prosopis juliflora is considered one of the world’s most threatening non-native tree species.

The government now wants to manage the species through a new Swiss-Kenyan Woody Weeds + project that was launched at the Kenya Forest Research Institute headquarters.

The initiative is being financed by the Swiss Agency for Development and Cooperation.

Human health and economies are at risk from invasive species.

The three-year project builds upon the previous Swiss-funded Woody Weeds + project which assessed the effects of Prosopis on the environment and rural livelihoods in Kenya, Ethiopia and Tanzania as well as ways to manage it.

It will strengthen livelihood security and environmental integrity in areas affected by Prosopis by supporting the delivery of the National Prosopis Strategy in pilot counties in Kenya.

Prosopis was introduced to Eastern Africa in the 1970sto provide wood and fodder for rural livelihoods and reduce erosion on degraded land.

In Ethiopia for example, Prosopis invaded 1.2 million hectares of land in the Afar region since its introduction in 1990.

It is estimated that more than half of the annual rainfall in this invaded range is used up by this invasive weed that consumes 1-36 litres of water per day.

Furthermore, grassland degradation has led to a 40-50 per cent decrease in Soil Organic Carbon.

The Woody Weeds + project will implement the newly established National Prosopis Strategy, jointly with relevant stakeholders, in a target area stretching from West to East along the southern edge of Kenya’s northern rangelands, targeting areas in Baringo, Isiolo and Tana River counties.

Additionally, local actors and decision-makers from the neighbouring counties of West Pokot, Laikipia and Meru will participate through meetings and awareness-raising campaigns.

Four main outcomes will be achieved including support for the establishment of a governance system and institutional arrangements that link actors across different decision-making levels.

In addition, the outcomes will include the seeking of innovative financing mechanisms through funds and impact investment and to secure the long-term sustainability of Prosopis management.

Kiptoo, said, “Land degradation caused by human activities is one of today’s greatest challenges to sustainable development. It is undermining the well-being of over 40 per cent of the human population, driving species extinctions and intensifying climate change. It is also a major contributor to mass human migration and increased resource use conflicts.

“For these and other reasons, the UN’s Sustainable Development Goals (SDGs) emphasize that halting land degradation and restoring degraded land is an urgent priority to protect the biodiversity and ecosystem services vital to all life on Earth and to ensure human well-being.”

The PS said invasive species have attracted much attention in the recent decades around the globe largely due to their negative impacts on the environment, land-use systems and livelihoods.

These effects have formed an important topic of discussion and policy not only in Kenya but also in many parts of Africa, South Asia, Australia and the Americas where the species was introduced and has naturalized.

The species in the country has affected about 2 million hectares of land.

They continue to spread to new areas, causing misery and ecological disaster due to their colonization and wiping of grass, forage species and biodiversity in wetlands.

The local communities in the affected areas have little or no knowledge of its management, control and/or utilization options and worse financial capacity that are necessary to curb its effects and spread.

Cheboiwo said that: “It is gratifying to note that development of the National Strategy and Action Plan for effective management of the invasive Prosopis juliflora species benefitted greatly from the scientific results of the project, Kenya’s vision 2030 and other national pillars that define sustainable management and integrity in resource use.”

Cheboiwo said they are confident that the application of scientific knowledge and innovation that has informed the development of the NPS will help to contain the competitive edge of Prosopis juliflora over other vegetation.”

The Woody Weeds + will also see the creation of an app that will help the dissemination of information, awareness-raising and decision support within and beyond the target area.

Cheboiwo added that the National Prosopis Strategy will gradually reach 22 counties in Kenya with technologies and approaches tried and tested in the three lead counties of Baringo, Isiolo and Tana River.

Post a comment
WATCH: The latest videos from the Star
by GILBERT KOECH News Reporter
News
13 October 2021 - 08:47
Read The E-Paper