His strategy is to whip western allegiance, Luhya's to fully rally behind him 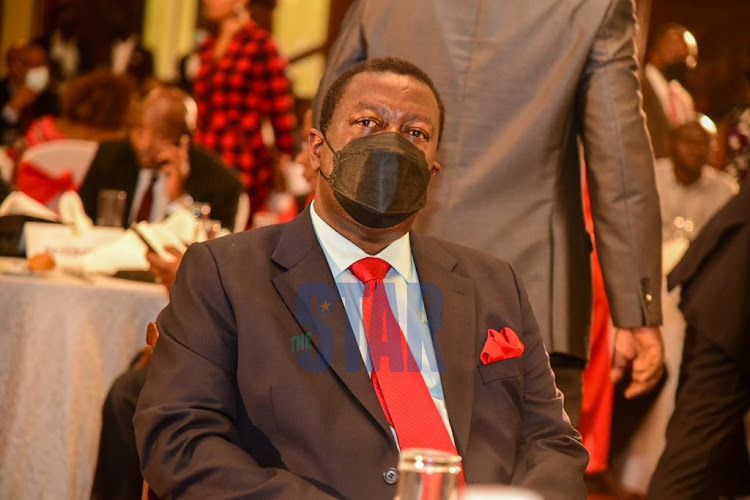 To achieve this, the Star has learnt that the One Kenya Alliance principal has laid out an elaborate plan to whip western Kenya to fully rally behind him.

He intends to combine the strategy with resource mobilisation and revival of countrywide networks established over his 30 years in politics.

Having assured his supporters that he will not play second fiddle in next year's presidential election and that his name will be on the ballot, winning OKA's ticket will be a fight to the death for Mudavadi.

Before he convinces the Luhya community to support him as a bloc, Mudavadi wants people in his backyard to register as voters en masse.

He wants the Luhya community to forget their political affiliations- for now- and come out to register.

“He has instructed his allies in the region to commit resources and teams to mobilise young people to come out in large numbers to be registered as voters,” a close confidant of Mudavadi said.

Leaders eyeing the same elective seat have been asked to put aside their differences and join forces to mobilise residents to register as voters.

Lugari MP Ayub Savula and Kakamega Senator Cleophas Malala are now, together, encouraging people to collect IDs and register as voters. The two are seeking to succeed Kakamega Governor Wycliffe Oparanya, who is serving his last term.

“Our focus at the moment is to ensure people in western Kenya come out in large numbers to register as voters,” Savula said.

Mudavadi believes the Luhya community has the numbers to boost his bargaining power in Oka and also propel him to the presidency.

Mudavadi and Kalonzo have unsuccessfully bid for the presidency at least once — Kalonzo in 2007 and Mudavadi in 2013.

Mudavadis' ambitions have been backed by reports showing that there are 990 uncollected IDs in his western Kenya.

The number of people from the region with IDs but have not registered as voters has been put at 1.2 million.

Mudavadi believes there are about 2.1 million potential new voters in western Kenya.

He further believes he has immense potential in Nairobi where a good number of people are from the Luhya community.

Members of the Luyha community are a significant proportion of population in these constituencies.

“If registration of voters is fully implemented in western Kenya including the issuance and collection of IDs, Luhya votes in western and Nairobi will go up significantly making the community a real decider of the presidential election in 2022,” a close confidant of Mudavadi said.

Kenya Population and Housing 2019 census put the Luhya community at 6.82 million, second to the Kikuyu who are 8.14 million and Kalenjin at 6.35 million.

Mbui said the four principals, in the meantime, will be reaching out to Kenyans to sell their candidature.

“The technical team is still doing its work and by end month, we will see some light at the end of the tunnel.

“OKA will choose a candidate by the end of this month to represent us in the ballot. Each leader has to convince the public to vote for them,” he said.