They warn them against favouring him in their 2022 political plans, saying he will sow discord. 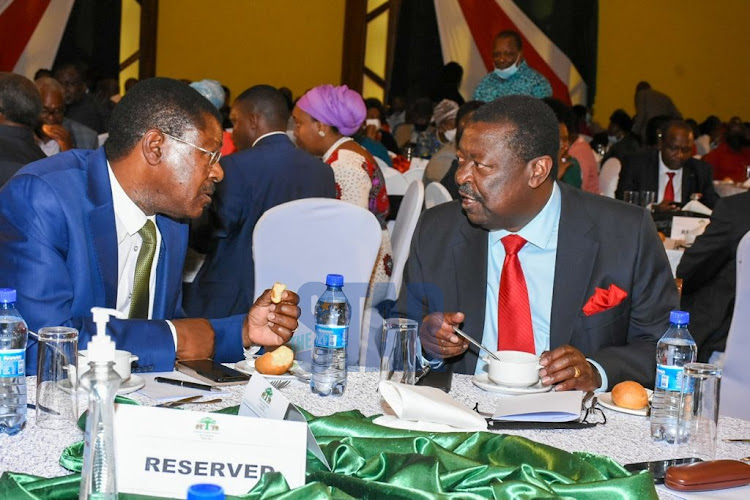 The One Kenya Alliance principals yesterday presented themselves as the most trustworthy lot to succeed President Kenyatta in an aggressive offensive against ODM boss Raila Odinga.

The Oka chiefs told tycoons from Uhuru’s Mt Kenya backyard that they will provide a secure political environment for their businesses to thrive if elected.

This was the first time the Oka bosses were coming face to face with the Mount Kenya Foundation to market their agenda for the President’s turf, as they seek to turn the tables on Raila.

During yesterday’s lengthy session at Safari Park Hotel, the Oka chiefs directed their fire at their rivals, whom they insisted cannot be trusted for the political and business security of the country.

However, in a veiled attack on Raila, they warned MKF tycoons against favouring ODM leader in their 2022 political plans, saying he will sow seeds of discord.

Jirongo, who is the newest principal in the Oka outfit, fired the first salvo, insisting that there were fears that the tycoons were engaged in a public relations exercise.

“The problem is coming from the mountain that you have a preferred candidate. How will we feel when you come with someone who has just voted for you once because of circumstances and leave us who have voted for you because we believe in you?” Jirongo said.

The former Lugari MP, who for the first time spoke as one of the Oka principals, insisted that the MKF team should not isolate other candidates but instead allow all of them to sell their policies.

"Let us go to the ground, you people must not have a preferred candidate. Let's work as a team and at the right time, Kenyans will see who is qualified to take us through this very risky period," he said.

Musalia sought to present himself as the man who can be trusted to shepherd the country.

The exclusive club of wealthy Mt Kenya businessmen two weeks ago held a similar meeting with Raila and appeared to declare the ODM boss their preferred 2022 presidential candidate.

Although they claimed that they had been tasked by the President to hunt for his suitable successor, they left no doubt that they preferred Raila to other contenders in next year’s contest.

On Thursday, the Oka bosses sought to position themselves as a formidable force in Uhuru’s succession matrix, saying they will stick together to the end and agree on one of them to fly the flag.

“Don’t worry about us coming in large numbers, at last, there will be the first among equals. He will be a person of humility and acceptability,” Wetang'ula said.

The Oka chiefs also sought to demonstrate how they have stood with the presidents from Mt Kenya, with Wetang'ula highlighting his role in the 2007-08 post-election violence crisis.

“Without me and​ Karua, this seat would have gone. Here we are telling you that let's engage and assure you that never again will a Kenyan rise against a Kenya because of politics,” he said.

Raila had disputed the presidential results that put PNU’s Kibaki as the winner, triggering a wave of violence that killed over a thousand Kenyans.

Musalia told the Mt Kenya tycoons that the country is yearning for a leader who will craft sound policies that will jumpstart the economy and create jobs after the Covid-19 pandemic.

“We should embrace the big industrialists and embrace the small businessperson. We should work together so that the pride of Mt Kenya can come back. That is what One Kenya stands for,” Mudavadi said.

Saying an Oka government will create a thriving nation and not a hustling country, Mudavadi stressed the need to elect a leader who will be willing to accept results and bring the country together.

“If we respect constitutionalism and the rule of law then there is nothing to fear. The team you are seeing does not elicit fear in anybody. We have not come here to sell fear,” he said.

Without naming him, Gideon said that for OKa the common enemy remains Deputy President William Ruto and that if the team worked together, they will be able to defeat him.

“I am the lastborn and the one who is most energised. Allow me to go ahead so that the rest sort out themselves. I know your enemy. If I get hold of the head will you be ready to endure the kicks?” he said.

MKF chairman Peter Munga warned that the people of Mt Kenya are not interested in handouts, in a veiled attack on Ruto.

“If you believe in facilitation as a substitute of inspiration then they are ready to take it ...... they can be rich by working hard,” he said, asking the Oka principals to stay united.

“The benefit of uniting is bigger for Kenya than you,” he said.

Kalonzo assured the people of Mt Kenya region the main agenda of Oka would be to revive the economy and give hope to jobless youth.

“We want you to believe in our plans, we want to give everybody an opportunity to prosper. Give us that chance to serve you,” he said.

The foundation hosted OKA officials days after having a similar event with Raila.
InPictures
1 week ago

Wiper leader appears to lack the steam as the countdown to 2022 presidential race rolls
News
1 week ago
by JAMES MBAKA AND ALLAN KISIA
News
08 October 2021 - 06:26