• MKF said they will meet other presidential candidates.

• They will then present their choice to the President. 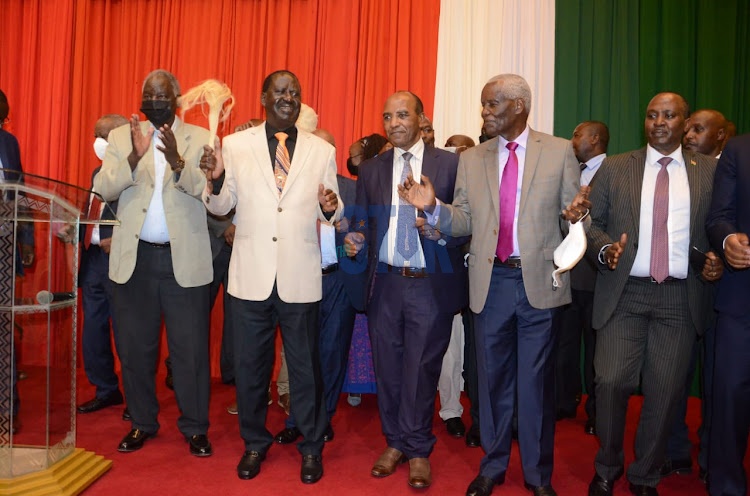 ODM leader Raila Oduinga has gotten a major boost in his State House bid after an elite team of Mount Kenya billionaires said they will back his quest.

Top Mt Kenya tycoons backed Raila's candidature even as they declared the beginning of a grand search for President Uhuru Kenyatta's successor.

The elite group popularly known as Mount Kenya Foundation said it had been tasked by the President to present a name of a possible candidate to take over from the President when he retires in August next year.

MKF vice chairman Titus Ibui  disclosed that the President met the wealthy club members in Sagana, Nyeri county  last year and sought their help in identifying a ideal person to take over in 2022.

"The President asked us to advise him on what type of person he should hand the mantle to," he said.

As part of the ongoing search, the influential foundation will on Friday meet the One Kenya Alliance as part of the broader scheme to identify Uhuru's successor.

"We will listen to all candidates; today we have started with Raila, on Friday we will come back here to hear from the OKA team," Ibui said.

"Once we have gone through the interaction, we will sit down to choose who we relate with and then take the name to the President."

Ibui did not however indicate whether the team will be meeting DP Ruto who is also seeking to succeed Uhuru.

Ibui said the foundation will be looking for someone with the capacity to build on the foundation laid by Jubilee's administration and who will not disturb the community's business interests.

Even as the team claimed to beginning the search, a number of governors from the region openly backed Rail for the State House race.

Governors Francis Kimemia (Nyandarua), Nderitu Murithi (Laikipia), Lee Kinyanjui (nakuru) and Kiambu’s James Nyoro called on the region to support the opposition chief claiming he has the best interest interest of the community.

Raila said this was part of a national dialogue to identify problems affecting Kenyans.
News
9 months ago

Kinyanjui said they will rally the community to back the ODM leader and will ensure he defeats DP Ruto who has also shown interest of succeeding Uhuru.

"We want to go into the election not with an option of winning but winning is a must," Kinyanjui said.

"Our decision must be based on what is good for the country. I will be careful to see who will fight corruption," he said.

Nderitu said it is time the community reciprocates Raila's 'Kibaki Tosha' endorsement of 2002.

"Raila said Kibaki Tosha, I ask you Mt Kenya what do we say?," he posed.

The meeting came a day after Raila made a strong entry into the vote-rich Mount Kenya where he spent last weekend.

MKF chairman Peter Munga said Raila has won the heart of the Kikuyu community, saying no one thought he would get the arousing welcome he received on Monday.

"Congratulations for that triumphant entry into that land of milk and honey, like Jesus entered Jerusalem is the way you did in Mt Kenya. You don't need to go looking for followers, your inspiration will simply draw them to you. That's what happened yesterday when you briefly climbed the mountain. Our people want a leader who will inspire them, " Munga said.

"When we started the journey on Monday I was the only MP accompanying Raila. At the seventh stop we were eight and today we are here 13 of us. You can tell what will happen when we meet you as Mt Kenya MPs," added Kieni MP Kanini Kega.