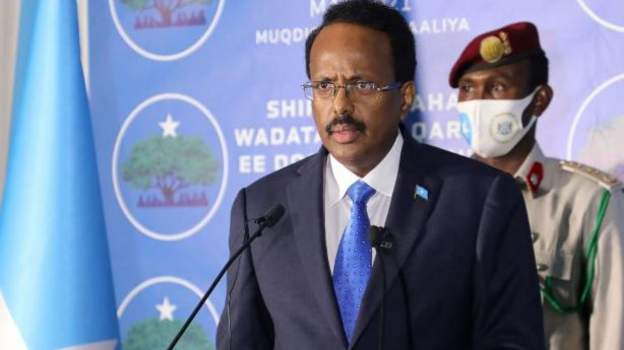 The two are fighting over changes in the country’s security apparatus, following the sacking of national intelligence chief Fahad Yassin and Internal Security minister Ambassador Hassan Jimale by the Prime Minister amid protests by Farmaajo and his allies.

The changes were triggered by the death of female intelligence officer Ikran Tahlil, who was kidnapped on June 26 and later killed in unclear circumstances.

Yassin is seen as a key player in Farmajo's reelection bid.

The latest partner to weigh in on the matter is the US.

On September 20, the State Department said in a statement that cooperation among Somalia's leaders, particularly President Farmaajo and Prime Minister Roble, is essential to ensure the country quickly completes its ongoing electoral process.

“The dispute between President Farmaajo and Prime Minister Roble risks complicating this process and needs to be resolved immediately and peacefully. The United States welcomes both sides’ stated commitment to the electoral process but remains concerned that these elections are already months behind schedule,” the statement said.

The US further warned that any further delay to the elections that were set for February 8 increases the potential for violence and plays into the hands of al-Shabaab and other extremist groups seeking to destabilise the country.

“Based on our shared interest to ensure the electoral process moves forward, we call on the President and the Prime Minister to avoid further provocative statements or actions and to resolve their disagreement over personnel appointments and their respective authorities peacefully.”

“Rapidly completing the electoral process will help advance the country’s counter-terrorism agenda and give the next government the opportunity to meet the needs of Somalia’s people.  Somalia’s citizens deserve nothing less,” the US said.

On September 18 members of the UN Security Council expressed concern about the ongoing disagreement within the Somali government and the negative impact on the electoral timetable and process.

They urged all stakeholders to exercise restraint, and underlined the importance of maintaining peace, security and stability in the country.

“The members of the Security Council urged all parties to resolve their differences through dialogue for the good of Somalia and to prioritise the peaceful conduct of transparent, credible and inclusive elections within the agreed timelines and in accordance with the 17 September and 27 May agreements,” the UNSC statement on the situation on Somalia said.

The council was briefed by the Special Representative of the Secretary-General James Swan on the current situation in Somalia.

Earlier on September 7, the international partners had in a joint statement said they were concerned that the controversy surrounding the disappearance of Tahlil Farah was creating political tensions that could impact on the functioning of the Somalia government and disrupt the electoral process.

“We urge Somali leaders to de-escalate the political confrontation surrounding this investigation and, in particular, avoid any actions that could lead to violence. We call on Somalia’s leaders to work together to advance the implementation of the 27 May Agreement toward the holding of elections, recognising the progress made to date by the National Consultative Council under the effective leadership of Prime Minister Mohamed Hussein Roble,” the statement said.

The partners are Amisom, Belgium, Canada, Denmark, Ethiopia, the EU, Finland, Germany and IGAD. Others include Ireland, Italy, Kenya, Netherlands, Norway, Poland, Qatar, Russian Federation, Sweden, Switzerland, the UK, the US, and the UN.

The partners said they would continue engaging Somali leaders to urge for a rapid resolution of the dispute, including a credible investigation of Ikran’s disappearance and the completion of the electoral process without any further delay.

Horn of Africa researcher Mohamed Gaas has, however, warned against direct influence by external actors in the Somalia elections.

“Somalia’s political system, elections included, is fragile. Intervening [in] them directly exasperates the political fragmentation, undermines budding institutions and is counterproductive. It should be avoided,” Gaas, of the Institute for Security Studies, said in a tweet.

In his address to the 76th UN General Assembly address, President Farmaajo said his government is working to hold free, fair and inclusive elections with largest number of participants since the civil war.

“The elections are centred on respecting the rights and wishes of the Somali people including the rights of women and youth to represent themselves within the very political arena that governs them,” he said.

It started with the sacking of national intelligence chief followed by changes in the Internal Security ministry.
News
1 month ago
by ELIUD KIBII Subeditor and writer
News
24 September 2021 - 23:00