AG has until October 18 to respond to Rasta marijuana case

Case listed four times but AG has not yet responded

• The case has been listed in court on several occasions and matters listed before Justice Weldon Korir for a mention.

• They want their case referred to Chief Justice Martha Koome to appoint a bench of uneven judges. 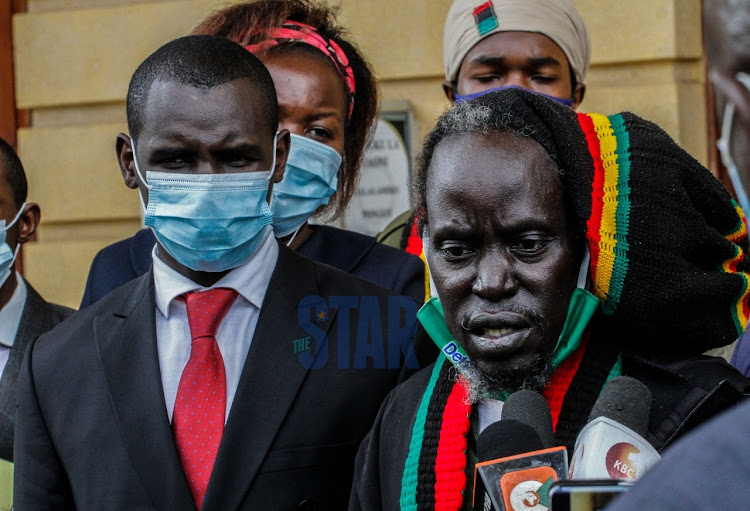 Sheria Mtaani director lawyer Shadrack Wambui with Rastafari Society of Kenya chairman Ras Lorjoron during a press briefing at Milimani court after filing a petition seeking to decriminalise marijuana use on May 17, 2021.
Image: ENOS TECHE

The Rastafari society has taken issue with the Attorney General’s office for not responding to a case in which they are seeking to legalise the use of marijuana for spiritual purposes.

The case has been listed in court on several occasions before Justice Weldon Korir for a mention. But the AG is yet to respond. This was the fourth time the case was being mentioned.

“Kindly note that we are yet to receive any response from yourselves, bearing in mind the explicit directives from the court,” the letter dated 8 September reads.

On Tuesday, the court gave the AG’s office until October 18 to put in its response to the case.

The Rastas, through lawyer Shaddrack Wambui, are seeking to suspend implementation of certain sections of the Narcotics Drugs and Psychotropic Substances Act in regard to the arrest, prosecution and conviction of their people and the private growth and use of cannabis in their private homes or designated places of worship.

“The impugned provision is an invasion to Rastas privacy rights under Article 31, a contravention of Rastas freedom to manifest his religion under Article 32 of the Constitution,” they say.

They also seek to have their case referred to Chief Justice Martha Koome to appoint a bench of uneven judges. They claim that their case raises substantial questions of law.

According to the court documents, Rastas outwardly manifest their beliefs and dedication to God through the growing of ‘rastas’ or ‘dreadlocks’ and the associated sacramental communion achieved through the use of the holy herb, which is crushed by the total prohibition of cannabis.

They say the police continue to harass, intimidate, arrest and cause prosecution, persecution and even imprisonment of their members for privately growing and using cannabis for spiritual purposes and for the sole purpose of connecting with the Almighty Creator.

“We are forced to live in fear as a minority religious group in Kenya as the current legislative framework is inimical to their religious practices as it fails to reasonably accommodate the Rastafari use of marijuana as a manifestation of their faith and for their connectedness with the Almighty Creator,” they say.

The documents indicate that for Rasta to enjoy his freedom of religion, for Rasta to fully manifest his faith, it requires of him or her to frequently use marijuana, or what is commonly known as ‘kushupeng’.

Their lawyer says this creates a connection between themselves and their maker.