A total of 3,351,109 vaccines have been administered across the country as of September 18.

• Nine patients have succumbed to the disease, pushing the cumulative fatalities to 4,989.

• 109 patients are in the Intensive Care Unit (ICU), 77 of whom are on ventilatory support and 25 on supplemental oxygen. Seven patients are under observation. 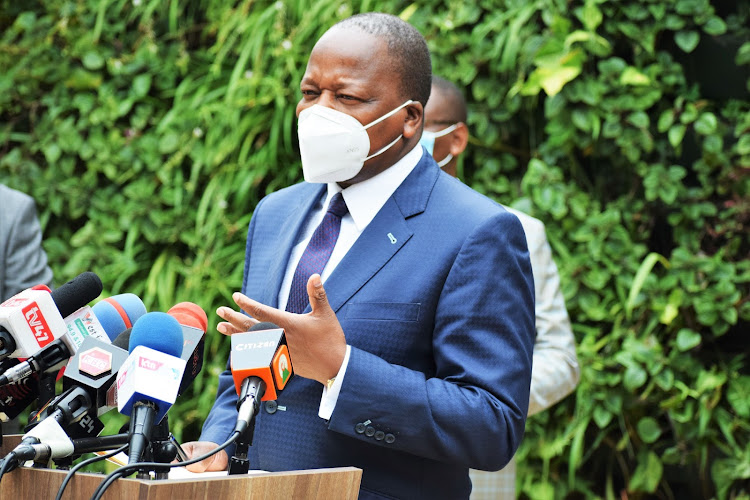 Kenya on Sunday recorded 234 new cases of the coronavirus from a sample size of 3,737 tested in the last 24 hours, with the positivity rate at 6.3%.

Health CS Mutahi Kagwe said in a statement that from the cases, 231 are Kenyans while three are foreigners, with 118 patients being males while 116 are females.

The youngest is a four-year-old child while the oldest is 97 years.

This brings the total confirmed positive cases in the country to 246,530, and the cumulative tests so far conducted to 2,498,049.

Kagwe said that patients 492 have recovered from the disease with 452 from the home-based isolation and care programme while 40 are from various health facilities countrywide.

Total recoveries now stand at 237,295 of whom 191,938 are from the home-based isolation and care programme, while 45,312 are from various health facilities countrywide.

Also, nine patients have succumbed to the disease, all of them being late deaths reported after conducting facility record audits in September 2021.

This pushes the cumulative fatalities to 4,989.

A total of 1,433 patients are currently admitted in various health facilities countrywide, while 3,246 are under the home-based isolation and care program.

109 patients are in the Intensive Care Unit (ICU), 77 of whom are on ventilatory support and 25 on supplemental oxygen. Seven patients are under observation.

Another 505 patients are separately on supplemental oxygen with 470 of them in general wards and 35 in High Dependency Units (HDU).

As of September 18, a total of 3,351,109 vaccines had been administered across the country.

The uptake of the second dose among those who received their first dose was at 34.5% with the majority being males at 55% while females were at 45%.

Proportion of adults fully vaccinated was 3.2%.

In terms of county distribution, Nairobi leads with 49 cases, Kitui 48, Makueni 19,Turkana 14, Nakuru 12, Kiambu and Uasin Gishu with 11 cases each and Kajiado has 10 cases.

Murang’a has nine cases, Garissa and Mombasa have eight cases each, Meru four, Nyandarua and Kakamega with three cases.