• The couple was charged with murdering Rouwenhorst and his guard, Evans Bokoro, on June 4 in Shanzu, Mombasa.

• Police say Nekesa and boyfriend Omondi and Nekesa have previously threatened people they suspected will be key witnesses. She is expected to be a state witness 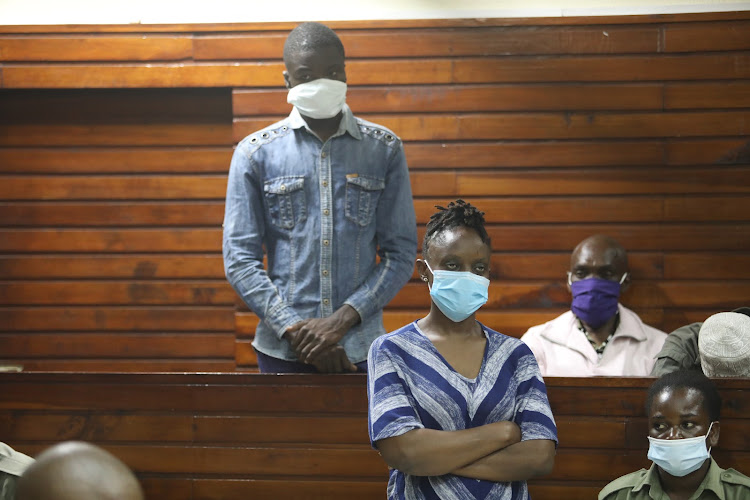 A Mombasa couple on Thursday pleaded not guilty to murdering Dutch businessman Herman Rouwenhorst and his security guard.

Rouwenhorst and guard Evans Bokoro were killed on June 4 at his home in the Shanzu area, Mombasa county. The Dutchman was struck with a blunt object, then strangled.

Timothy Omondi and his girlfriend Mary Nekesa were accused of the murders at Roco Apartments. They appeared before High Court judge Anne Onginjo.

The police alleged the murder was planned by Rouwenhorst's wife, Riziki Cherono, and planned with her friend Nekesa for more than a month. The businessman is said to have planned to divorce his wife.

The prosecution objected to the release of the accused persons on bond, citing likely witness intimidation.

Investigating officer Reuben Mwaniki said Omondi and Nekesa were likely to interfere with likely prosecution witnesses as they have already been threatening some of them.

He said Nekesa had threatened persons she considered potential witnesses and warned them Omondi would kill them if they testified about the double murder.

Mwaniki said key prosecution witnesses are well known to the accused. He said if they were released, they were likely to intimidate them and make them afraid to testify.

The officer said Nekesa introduced Omondi to Cherono, who is also facing murder charges. She allegedly said her boyfriend would be a suitable person to kill Rouwenhorst for an agreed payment of Sh1 million.

“Several meetings were convened by Nekesa on behalf of Cherono to discuss how best the murder could be carried out," he said in a sworn affidavit.

Mwaniki said that in May, Omondi was assisted in taking photographs of the apartments and internal layout of the residence to familiarise himself.

On June 4, Nekesa is said to have opened the door for Omondi and two people who murdered the night guard before attacking Rouwenhorst.

Mwaniki said Omondi then stole money from a safe, which he used to buy land and build a house.

The investigator also expressed fears the Dutchman's friends might attack the suspects, citing that as another reason not to grant bail.

He said Rouwenhorst had several friends in Mombasa who were angered by his murder and there has been reliable information they wanted to avenge his death.

The matter will be mentioned on October 4 for directions on a bond hearing.

Girlfriend of suspect in murder of Dutchman seeks plea bargain

In return, Mary Nekesa is expected to get a reduced sentence.
News
3 months ago

Police are treating Riziki Cherono as the key suspect in the murder.
News
5 months ago

Investigators have yet to crack any leads, but are optimistic they will have something by the end of the week.
Counties
5 months ago
by MALEMBA MKONGO Correspondent, Coast Region
News
16 September 2021 - 23:00