• The lawmakers have also rolled out grassroots mobilisation campaigns with a view to replacing interim officials who defected. 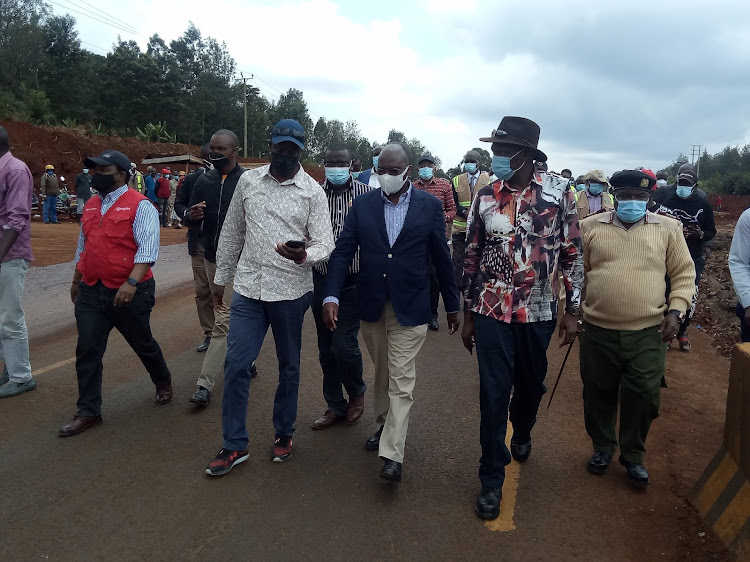 Jubilee legislators have rolled out a campaign to showcase President Uhuru Kenyatta’s legacy projects as a means of marketing the ruling party.

The lot has identified projects largely in areas where Jubilee enjoyed a massive following, being Nairobi, Kiambu, Murang’a, Nyeri, Kirinyaga, Laikipia and Nyandarua.

To be showcased is the ongoing expansion of the Kenol-Sagana-Marua road into a dual carriageway, which is set to cost Sh15 billion.

The road traversing Murang'a, Kirinyaga and Nyeri is one of the major projects by President Kenyatta’s Jubilee administration in the Mt Kenya region.

Last Thursday, the MPs joined Transport CS James Macharia in an inspection tour of the dual carriageway, which is part of the Trans-Africa Highway projects.

Also listed are the ongoing works on 540km Mau Mau road, irrigation projects in Kirinyaga under the Thiba Dam, and four new hospitals being built in Nairobi and parts of Kiambu.

Several markets constructed by the Jubilee administration, including in collaboration with county governments, are also lined up for crediting to the Kenyatta administration.

The lawmakers were on Wednesday scheduled to conduct a tour of development projects in Nairobi accompanied by several Cabinet Secretaries but the tour was rescheduled.

The tour of four hospitals and a number of roads under construction within the Nairobi metropolis was rescheduled to another date as the NMS boss was away.

Some of the MPs, in separate interviews with the Star, held that some of the projects would not have progressed well were it not for their steadfast support of the Jubilee government.

Wambugu said that were it not for their steadfast support for President Kenyatta’s government to be allowed to work, such projects would not be completed.

“We have been consistent that what we wanted was for our colleagues to stop early campaigns and allow the President the latitude to deliver on his promises,” he said.

“When we see such projects, and they are not only in Central Kenya but across the country, I am proud of Jubilee Party. This is our work,” he said.

The lawmaker said most of the government’s plans, and, by extension, the Jubilee Party’s, were disrupted by the early campaigns by those who were keen on detracting the president from delivering on his promise to Kenyans.

“We insisted that we will not go into premature politics but we knew we will finally come to our people and show them what we have been doing. These projects are our works,” Wambugu added.

The MPs want their competitors to take up the challenge and make tours accompanied by the state agencies implementing the projects as proof of their claim to the projects.

“We challenge them to make such tours accompanied by the implementers, then we will know actually they have a share of the work.”

For his part, Kega said the National Assembly Budget committee – which he chairs - would ensure that the ventures get adequate resources for their completion.

“As the Budget committee, we ensured that every coin relating to these projects was approved. We are proud to see what is coming out of them,” the Kieni legislator said.

The concern by the lawmakers is that despite the mega projects, the region has remained restive against the Jubilee administration.

They hold that it is for lack of adequate information on Jubilee projects that the region is being viewed as the strongest bedrock of Deputy President William Ruto’s UDA party.

It is by claiming such projects and showing them as Jubilee Party's work that the proponents of Jubilee Reloaded seek to use to gain a pedestal in the contest for the Central Kenya numbers.

Kioni said, “Those contesting various offices, especially national elective positions, must assure Kenyans that they will complete the projects before starting new ones in case they are not complete by the end of the current term.”

The Jubilee team has also started holding its county-based caucuses in efforts to mobilise more members to join the party in the revamp bid and replace interim officials who have defected.

Kiambu county delegates held their meeting on Friday with Nyeri and Murang’a slated to hold such meetings by Friday.

Kariuki says nine are complete and six are a work in progress.
Counties
3 weeks ago

Uhuru turns his focus to legacy projects after BBI flops