•The degraded areas are those from which illegal settlers were evicted. 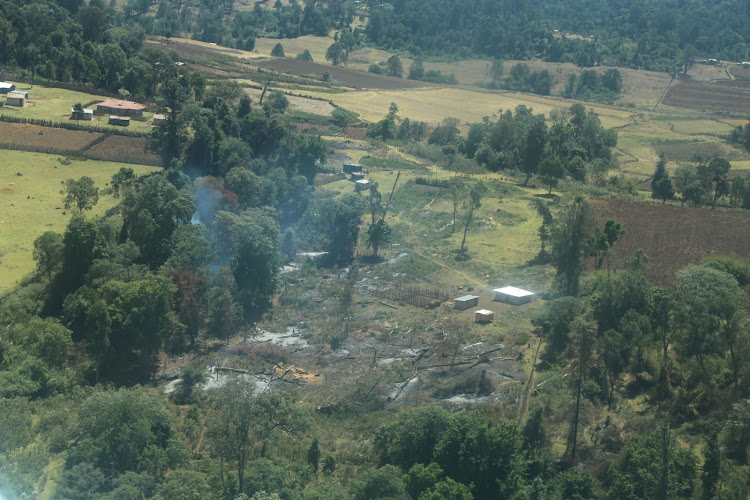 DEGRADED: A section of the degraded Mau Forest.
Image: FILE

Illegal herders and adjacent residents have destroyed about one kilometre of the Sh8 million fence to protect the highly degraded Maasai Mau forest.

The Kenya Water Towers Agency has been putting up the 120km electrified fence as one way to keep out illegal herders.

However, a group of the community living next to the forest has pulled down posts.

“Sixty posts, about one kilometre, have been destroyed already,” a source familiar with the destruction told the Star.

“We are investigating and and some arrests,” Narok county commissioner Evans Achoki told the Star by phone.

He said authorities will not rest until order is restored.

It was not immediately clear when the destruction occurred.

The fence has five to 10 wires between heavy timber poles to restrain big game, antelope and carnivores.

The electrified fending is intended to keep animals in and people out. It will protect the most degraded areas and allow for rehabilitation and tree planting.

The degraded areas are those from which illegal settlers were evicted.

These areas were completely degraded and cannot be restored by natural regeneration, hence, the need to fence off to facilitate tree planting.

To protect areas severely degraded by settlers who were evicted.
Counties
1 year ago

The fence will run 120km from Sierra Leone to Olkurto.

Restoration of the forest could cost Sh900 million.

It began as soon as illegal settlers were evicted in 2019.

More than Sh16,000 had been budgeted to evict illegal settlers who destroyed huge sections of forest.

The remaining 37,065 acres was to be rehabilitated through natural regeneration and enrichment planting.

The area had sufficient vegetation to support production of seedlings from the existing trees, seedlings, saplings and shrubs.

The forest was the most threatened bloc of the Maasai Mau Complex due to human pressure and destruction.

The goal of the fence-building  is to enhance management, conservation and protection of the water tower so it meets the ecological, social, economic and cultural needs of current and future generations.

Fencing reduces human-wildlife conflict as it controls large animals. It keeps away people, cattle, sheep and goats that can destroy planted seedlings.

The first evictions covered 1,772 households totalling 8,860 people. It took place from July 6 to 10 between the Nkoben River's north boundary and Kosia.

About 3,000 head of livestock were removed but crops were spared.

A 2008 survey of 7,971 households showed more than 30 per cent had no ownership documents.

Last year, illegal settlers vacated after a 60-day window to voluntarily move out lapsed on October 30.

During the second phase, about 22,000 acres were recovered.

The government aims to plant 10 million trees in the water tower.

They are among 15 species planted in 2019 after illegal settlers were expelled.

The alternative is ground-based seeding, including planting by hand or tractor seeding.

The Kenya Forestry Research Institute's Dr Jane Njuguna said germination has not been recorded by six species but said they have different dormancy periods, some as long as 10 years. She is Kefri's research and development director.

“Two species that were not seeded, caris edulis and syzygium guineense were recorded, indicating the potential for regeneration,” she said.

“Some will stay until dormanct is broken by certain factors,” she said. The study was done in a small area plagued by Covid-19.

Kisalu said no one will will be able to enter the forest, hence it will regenerate naturally, with some planting.
Counties
6 months ago

Solar-powered and main energisers will be used to construct the barrier
Counties
10 months ago
by GILBERT KOECH News Reporter
News
13 September 2021 - 22:00